George Washington and the Irish: Incredible Stories of the Irish Spies, Soldiers, and Workers Who Helped Free America (Hardcover) 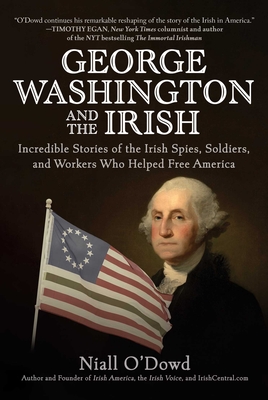 Discover the untold story of the vital role the Irish played in the American Revolution.

George Washington changed the world and saved democracy by defeating the British during the American War of Independence. The Irish role in the American Revolution, the war for the ages, has never been correctly reported. Because many of the Irish who fought were poor and illiterate and left no memoirs, their stories and role have never been told. Until now.

The Irish played a huge role in the American Revolution, not just on the battlefield but also in the field hospitals and in the framing of the Declaration of Independence. Learn the story of the famous spy Hercules Mulligan, who saved George Washington’s life on two occasions and who was famously portrayed by Okieriete Onaodowan in Lin-Manuel Miranda’s smash hit Hamilton. Discover the story of Edward Hoban, a carpenter from Ireland who Washington tasked with building the most famous residence in the world: the White House.

Niall O’Dowd, author of Lincoln and the Irish and A New Ireland, takes readers on a journey into the unexplored contributions of the Irish in the American Revolution and behind the scenes of the relationships of some of those men and women with the first president of the United States. These unsung heroes of the American Revolution have never gotten their due, never had their story told, until now, in George Washington and the Irish.

Niall O’Dowd is the founder of IrishCentral, Irish America Magazine, and the Irish Voice newspaper. He is also responsible for publishing IrishCentral.com and the Irish Emigrant newspaper in Boston. Niall was awarded an honorary doctorate by University College Dublin for his work on the Irish peace process, which was a subject of a book, Daring Diplomacy, and a PBS Special, An Irish Voice. He has written for the New York Times, the Guardian, Huffington Post, and the Irish Times. He lives in New York City.