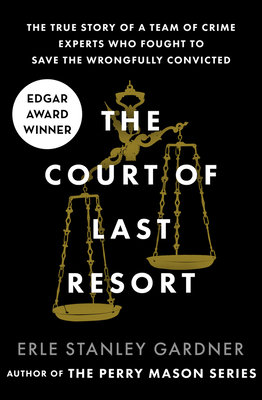 By Erle Stanley Gardner
$22.99
Not On Our Shelves - Available to Order

Edgar Award Winner: True stories of miscarriages of justice, legal battles, and landmark reversals, by the creator of Perry Mason. In 1945, Erle Stanley Gardner, noted attorney and author of the popular Perry Mason mysteries, was contacted by an overwhelmed California public defender who believed his doomed client was innocent. William Marvin Lindley had been convicted of the rape and murder of a young girl along the banks of the Yuba River, and was awaiting execution at San Quentin. After reviewing the case, Gardner agreed to help--it seemed the fate of the "Red-Headed Killer" hinged on the testimony of a colorblind witness. Gardner's intervention sparked the Court of Last Resort. The Innocence Project of its day, this ambitious and ultimately successful undertaking was devoted to investigating, reviewing, and reversing wrongful convictions owing to poor legal representation, prosecutorial abuses, biased police activity, bench corruption, unreliable witnesses, and careless forensic-evidence testimony. The crimes: rape, murder, kidnapping, and manslaughter. The prisoners: underprivileged and vulnerable men wrongly convicted and condemned to life sentences or death row with only one hope--the devotion of Erle Stanley Gardner and the Court of Last Resort. Featuring Gardner's most damning cases of injustice from across the country, The Court of Last Resort won the Edgar Award for Best Fact Crime. Originating as a monthly column in Argosy magazine, it was produced as a dramatized court TV show for NBC.

Erle Stanley Gardner (1889-1970) was an author and lawyer who wrote nearly 150 detective and mystery novels. Awarded the honor of Grand Master by the Mystery Writers of America in 1962 and hailed by Evelyn Waugh as "the best American writer," he ranks as one of the most prolific specialists of crime fiction due to his popular alter ego, lawyer-detective Perry Mason. A self-taught lawyer, Gardner was admitted to the California bar in 1911 and began defending poor Chinese and Mexicans as well as other clients. Eventually his writing pushed his law career aside, but as proven in his Edgar Award-winning The Court of Last Resort, Gardner never gave up on the cases of wrongly accused individuals or unjustly convicted defendants.