The Paranoid Style in American Diplomacy: Oil and Arab Nationalism in Iraq (Stanford Studies in Middle Eastern and Islamic Societies and) (Paperback) 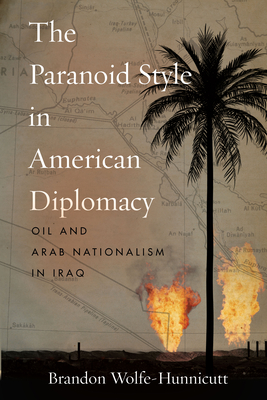 A new history of Middle East oil and the deep roots of American violence in Iraq.

Iraq has been the site of some of the United States' longest and most sustained military campaigns since the Vietnam War. Yet the origins of US involvement in the country remain deeply obscured--cloaked behind platitudes about advancing democracy or vague notions of American national interests. With this book, Brandon Wolfe-Hunnicutt exposes the origins and deep history of US intervention in Iraq.

The Paranoid Style in American Diplomacy weaves together histories of Arab nationalists, US diplomats, and Western oil execs to tell the parallel stories of the Iraq Petroleum Company and the resilience of Iraqi society. Drawing on new evidence--the private records of the IPC, interviews with key figures in Arab oil politics, and recently declassified US government documents--Wolfe-Hunnicutt covers the arc of the twentieth century, from the pre-WWI origins of the IPC consortium and decline of British Empire, to the beginnings of covert US action in the region, and ultimately the nationalization of the Iraqi oil industry and perils of postcolonial politics.

American policy makers of the Cold War era inherited the imperial anxieties of their British forebears and inflated concerns about access to and potential scarcity of oil, giving rise to a paranoid style in US foreign policy. Wolfe-Hunnicutt deconstructs these policy practices to reveal how they fueled decades of American interventions in the region and shines a light on those places that America's covert empire builders might prefer we not look.

Brandon Wolfe-Hunnicutt is Associate Professor of History at California State University, Stanislaus. His writing has appeared in Diplomatic History, Diplomacy & Statecraft, and the Oxford Research Encyclopedia of American History.