Egypt's Occupation: Colonial Economism and the Crises of Capitalism (Paperback) 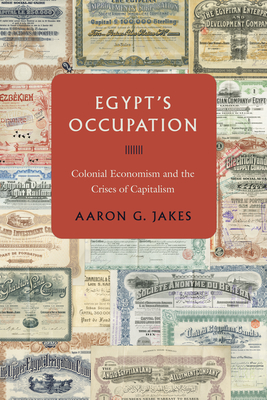 The history of capitalism in Egypt has long been synonymous with cotton cultivation and dependent development. From this perspective, the British occupation of 1882 merely sealed the country's fate as a vast plantation for European textile mills. All but obscured in such accounts, however, is Egypt's emergence as a colonial laboratory for financial investment and experimentation. Egypt's Occupation tells for the first time the story of that financial expansion and the devastating crises that followed.

Aaron Jakes offers a sweeping reinterpretation of both the historical geography of capitalism in Egypt and the role of political-economic thought in the struggles that raged over the occupation. He traces the complex ramifications and the contested legacy of colonial economism, the animating theory of British imperial rule that held Egyptians to be capable of only a recognition of their own bare economic interests. Even as British officials claimed that economic development and the multiplication of new financial institutions would be crucial to the political legitimacy of the occupation, Egypt's early nationalists elaborated their own critical accounts of boom and bust. As Jakes shows, these Egyptian thinkers offered a set of sophisticated and troubling meditations on the deeper contradictions of capitalism and the very meaning of freedom in a capitalist world.

Aaron G. Jakes is Assistant Professor of History at The New School.