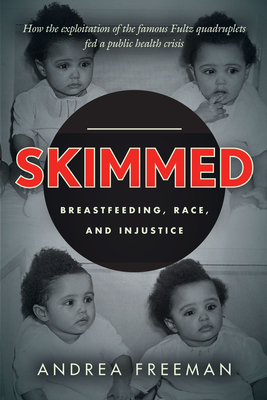 Born into a tenant farming family in North Carolina in 1946, Mary Louise, Mary Ann, Mary Alice, and Mary Catherine were medical miracles. Annie Mae Fultz, a Black-Cherokee woman who lost her ability to hear and speak in childhood, became the mother of America's first surviving set of identical quadruplets. They were instant celebrities. Their White doctor named them after his own family members. He sold the rights to use the sisters for marketing purposes to the highest-bidding formula company. The girls lived in poverty, while Pet Milk's profits from a previously untapped market of Black families skyrocketed.

Over half a century later, baby formula is a seventy-billion-dollar industry and Black mothers have the lowest breastfeeding rates in the country. Since slavery, legal, political, and societal factors have routinely denied Black women the ability to choose how to feed their babies. In Skimmed, Andrea Freeman tells the riveting story of the Fultz quadruplets while uncovering how feeding America's youngest citizens is awash in social, legal, and cultural inequalities. This book highlights the making of a modern public health crisis, the four extraordinary girls whose stories encapsulate a nationwide injustice, and how we can fight for a healthier future.

Andrea Freeman is Associate Professor at the University of Hawai'i at Mānoa William S. Richardson School of Law. Freeman writes and researches at the intersection of critical race theory and issues of food policy, health, and consumer credit. She is the pioneer of the theory of food oppression, which examines how partnerships between the government and corporations lead to racial and gender health disparities. Her work has been featured on NPR, Huffington Post, Salon, The Washington Post, The Conversation, Pacific Standard, and more.