Declarations of Dependence: Money, Aesthetics, and the Politics of Care (Provocations) (Paperback) 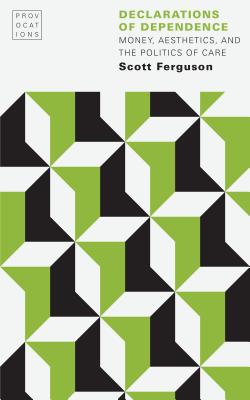 Declarations of Dependence rethinks the historical relationship between money and aesthetics in an effort to make critical theory newly answerable to politics. Scott Ferguson regrounds critical theory in the alternative conception of money articulated by the contemporary heterodox school of political economy known as Modern Monetary Theory. Applying the insights of this theory, Ferguson contends that money, rather than representing a private, finite, and alienating technology, is instead a public and fundamentally unlimited medium that harbors still-unrealized powers for inclusion, cultivation, and care.

Ferguson calls Modern Monetary Theory’s capacious ontology of money the “unheard-of center” of modern life. Here he installs this unheard-of center at the heart of critique to inaugurate a new critical theory that aims to actualize money’s curative potential in a sensuous here-and-now. Declarations of Dependence reimagines the relation between money and aesthetics in a manner that points beyond neoliberal privation and violence and, by doing so, lends critical theory fresh relevance and force.

Scott Ferguson is an assistant professor in the Department of Humanities and Cultural Studies at the University of South Florida. He is a research scholar at the Binzagr Institute for Sustainable Prosperity.

“Declarations of Dependence is humanities scholarship at its best: incisively written, it uses a new approach to a core philosophical and political question—what is money?—in the service of developing truly surprising and revealing interpretations of works ranging from medieval scholastic philosophy to Star Wars.”—David Golumbia, associate professor of digital studies in the Department of English at Virginia Commonwealth University

“A bold polemic on behalf of collective flourishing, Declarations of Dependence challenges readers to demand more from social relations and to demand more from aesthetic pleasures and should be required reading for literary and cultural theorists, political economists, care workers, and policymakers of all stripes.”—Anna Kornbluh, associate professor of English at the University of Illinois, Chicago

“Deeply original, Declarations of Dependence makes a vital contribution to cultural studies and cultural and aesthetic theory. . . . Indeed, it is so rich in suggestions that it could inspire an entire series of Modern Monetary Theory–guided inquiries into various areas of modern culture.”—Steven Shaviro, Deroy Professor of English at Wayne State University