Shark Lady: The True Story of How Eugenie Clark Became the Ocean's Most Fearless Scientist (Hardcover) 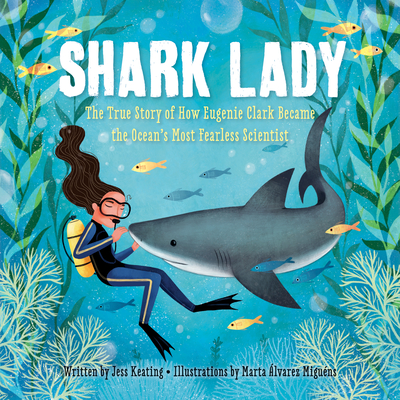 One of New York Times' Twelve Books for Feminist Boys and Girls!

An Amazon Best Book of the Month

Named a Best Children's Book of 2017 by Parents magazine

Eugenie Clark fell in love with sharks from the first moment she saw them at the aquarium. She couldn't imagine anything more exciting than studying these graceful creatures. But Eugenie quickly discovered that many people believed sharks to be ugly and scary—and they didn't think women should be scientists.

Determined to prove them wrong, Eugenie devoted her life to learning about sharks. After earning several college degrees and making countless discoveries, Eugenie wrote herself into the history of science, earning the nickname "Shark Lady." Through her accomplishments, she taught the world that sharks were to be admired rather than feared and that women can do anything they set their minds to.

An inspiring story by critically acclaimed zoologist Jess Keating about finding the strength to discover truths that others aren't daring enough to see. Includes a timeline of Eugenie's life and many fin-tastic shark facts!

The perfect choice for parents looking for:

As an author and zoologist, Jess Keating has tickled a shark, lost a staring contest against an octopus, and been a victim to the dreaded paper cut. She lives in Ontario, Canada, where she spends most of her time writing books for adventurous and funny kids. Her first fiction novel How to Outrun a Crocodile When Your Shoes Are Untied received a Starred Review from Kirkus and has been nominated for a Red Maple award. Visit her online at jesskeating.com.

"This biography rose to the top because it tells Clark’s story—from her childhood fascination with sharks to becoming a scientist who was able to train them—without overwhelming kids with text. "After I read this book with my 6-year-old daughter, she told me that she wanted to be a scientist," beamed one dad. " — Parents

"The writing flows well, keeping a clear focus on Clark and her dream, while including pertinent details from the career of "the Shark Lady," known for her groundbreaking research and her work to change people’s perceptions of sharks… A lively introduction to an American scientist." — Booklist

"A tribute to the courage and indomitable will of the renowned ichthyologist. This eloquent profile follows Clark from a childhood visit to an aquarium through her demonstration that sharks can actually be trained and so are not "mindless killers" as widely supposed" — Kirkus Reviews

"Keating (Pink Is for Blobfish) offers a lively portrait of scientist Eugenie Clark, who pursued a passion for sharks… Through Clark’s story, Keating suggests that, with perseverance, a childhood fascination can evolve into a life’s work." — Publishers Weekly

"Commemorating a lifetime of discovery and exploration, Shark Lady, from Jess Keating, follows the extraordinary path of Eugenie Clark—inspirational scientist, professor, zoologist, deep sea diver, and champion of sharks the oceans over. Boldly hued and fluidly graceful, illustrations from Marta Álvarez Miguéns, complete with fun facts and a timeline, creatively convey Eugenie’s courage and determination as she dives into books, laboratories, education, and open waters to share her love and knowledge of the often misunderstood predators." — Foreword Review

"Shark Lady" is a great book to read with a child on one’s lap, introducing him or her both to the ocean world as well as someone who defied the naysayers and became a world-renowned scientist and advocate." — Deeper Blue

"This is an inspirational story of a woman who challenged perceptions at a time when few women were encouraged to enter the profession… a great selection for women’s history month or for units on ocean life." — School Library Connection

"'Shark Lady' is a celebration of the wonder of nature and of a daring woman who changed the way the world saw the ocean." — A Mighty Girl