The Heart of Everything That Is: Young Readers Edition (Hardcover) 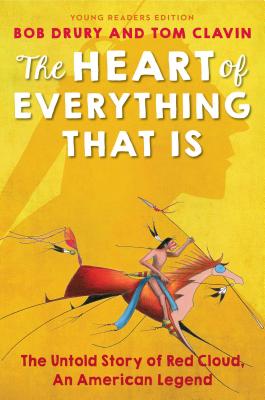 “The authors present the epic story of Red Cloud, the only Native American tribal leader to defeat the U.S. Army in the West. Red Cloud could be vicious and savage and he used those attributes to achieve power. But he could also show patience and restraint in his efforts to defeat the Army's expansion into the Powder River country of present-day Wyoming. This book presents an important chapter in American history that needed to be told, using Red Cloud's own autobiography as a major source.”
— George Rishel, The Sly Fox, Virden, IL

From bestselling authors Bob Drury and Tom Clavin comes the epic, untold story one of the most powerful Sioux warriors of all time, Red Cloud—now adapted for a younger audience!

“I have but a small spot of land left. The Great Spirit told me to keep it.” —Red Cloud

This young readers edition of the New York Times bestseller of the same name tells the long forgotten story of the powerful Oglala Lakota chief, Red Cloud. At the height of Red Cloud’s power the Sioux claimed control of vast parts of the west. But as the United States rapidly expanded, the country brutally forced the Indians off their lands.

Fighting for the survival of the Sioux way of life, Red Cloud successfully secured the loyalty of thousands of fierce fighters, including Crazy Horse, and is the only American Indian in history to defeat the United States Army in a war.

Thanks to the rediscovery of Red Cloud’s long-lost autobiography, and painstaking research by two award-winning authors, and with the help of a world-class adapter, the story of the nineteenth century’s most powerful and successful Indian warrior can finally be told.

Bob Drury is the author/coauthor/editor of nine books. He has written for numerous publications, including The New York Times, Vanity Fair, Men’s Journal, and GQ. He is currently a contributing editor and foreign correspondent for Men’s Health. He lives in Manasquan, New Jersey.

Tom Clavin is the author or coauthor of sixteen books. For fifteen years he wrote for The New York Times and has contributed to such magazines as Golf, Men’s Journal, Parade, Reader’s Digest, and Smithsonian. He is currently the investigative features correspondent for Manhattan Magazine. He lives in Sag Harbor, New York.

“The carefully adapted young readers’ version of [the authors] adult book, which tells the story of Red Cloud, a powerful Oglala Lakota chief…reads like an adventure tale. By recounting the story of one warrior, the books retells the tragic story of an infamous frontier conflict from an oft-ignored perspective.”
— Booklist