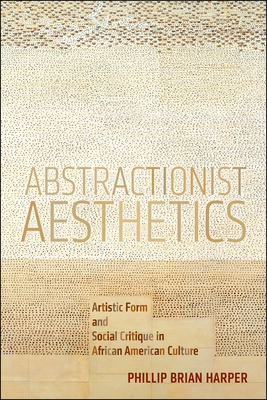 An adeptly Brechtian intervention in the perceived social realist mandate of contemporary African American arts, Phillip Brian Harper writes not only in meticulous defense of abstraction as a program and a practice (hence the 'ism') but does a great job teasing out the contradictions within these concepts. Highly programmatic, it proceeds over three chapters; the first addresses itself to the visual arts and feels extremely timely; the second focuses on music, including attentive transcriptions and some really stunning readings of Louis Armstrong and Cecil Taylor; and the third addresses literature. Some frankly flimsy remarks on poetic lineation aside, this chapter culminates in a great structural argument for the foregrounding of technique as a consciousness-raising exercise.

In a major reassessment of African American culture, Phillip Brian Harper intervenes in the ongoing debate about the "proper" depiction of black people. He advocates for African American aesthetic abstractionism--a representational mode whereby an artwork, rather than striving for realist verisimilitude, vigorously asserts its essentially artificial character. Maintaining that realist representation reaffirms the very social facts that it might have been understood to challenge, Harper contends that abstractionism shows up the actual constructedness of those facts, thereby subjecting them to critical scrutiny and making them amenable to transformation.

Arguing against the need for "positive" representations, Abstractionist Aesthetics displaces realism as the primary mode of African American representational aesthetics, re-centers literature as a principal site of African American cultural politics, and elevates experimental prose within the domain of African American literature. Drawing on examples across a variety of artistic production, including the visual work of Fred Wilson and Kara Walker, the music of Billie Holiday and Cecil Taylor, and the prose and verse writings of Ntozake Shange, Alice Walker, and John Keene, this book poses urgent questions about how racial blackness is made to assume certain social meanings. In the process, African American aesthetics are upended, rendering abstractionism as the most powerful modality for Black representation.