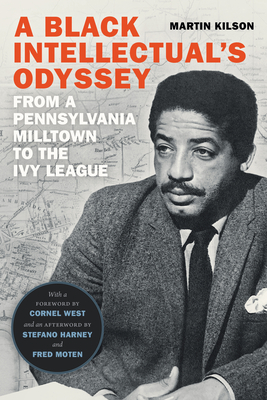 In 1969, Martin Kilson became the first tenured African American professor at Harvard University, where he taught African and African American politics for over thirty years. In A Black Intellectual's Odyssey, Kilson takes readers on a fascinating journey from his upbringing in the small Pennsylvania milltown of Ambler to his experiences attending Lincoln University-the country's oldest HBCU-to pursuing graduate study at Harvard before spending his entire career there as a faculty member. This is as much a story of his travels from the racist margins of twentieth-century America to one of the nation's most prestigious institutions as it is a portrait of the places that shaped him.

He gives a sweeping sociological tour of Ambler as a multiethnic, working-class company town while sketching the social, economic, and racial elements that marked everyday life. From narrating the area's history of persistent racism and the racial politics in the integrated schools to describing the Black church's role in buttressing the town's small Black community, Kilson vividly renders his experience of northern small-town life during the 1930s and 1940s.

At Lincoln University, Kilson's liberal political views coalesced as he became active in the local NAACP chapter. While at Lincoln and during his graduate work at Harvard, Kilson observed how class, political, and racial dynamics influenced his peers' political engagement, diverse career paths, and relationships with white people. As a young professor, Kilson made a point of assisting Harvard's African American students in adapting to life at a white institution.

Throughout his career, Kilson engaged in pioneering scholarship while mentoring countless students. A Black Intellectual's Odyssey features contributions from three of his students: a foreword by Cornel West and an afterword by Stefano Harney and Fred Moten.

Martin Kilson (1931-2019) was Frank G. Thomson Professor of Government Emeritus at Harvard University. He wrote and edited several books, including Transformation of the African American Intelligentsia, 1880-2012, which won the 2015 American Book Award. He was a Fellow of the American Academy of Arts and Sciences, a Guggenheim Fellow, a member of the National Council on the Humanities, and a longtime member of the editorial board of Dissent. Cornel West is Dietrich Bonhoeffer Professor at Union Theological Seminary. Stefano Harney and Fred Moten are two of Martin Kilson's many students. They are authors of The Undercommons: Fugitive Planning and Black Study and All Incomplete.