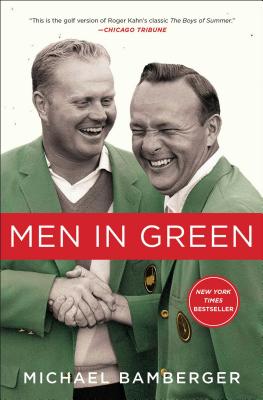 With “exceptional insight into some of America’s greatest players over the last half-century” (The Philadelphia Inquirer), Men in Green is to golf what Roger Kahn’s The Boys of Summer was to baseball: a big-hearted account of the sport’s greats, from the household names to the private legends, those behind-the-curtain giants who never made the headlines.

Michael Bamberger, who has covered the game for twenty years at Sports Illustrated, shows us the big names as we’ve never seen them before: Arnold Palmer, Jack Nicklaus, Tom Watson, Curtis Strange, Fred Couples—and the late Ken Venturi. But he also chronicles the legendary figures known only to insiders, who nevertheless have left an indelible mark on the sport. There’s a club pro, a teaching pro, an old black Southern caddie. There’s a tournament director in his seventies, a TV director in his eighties, and a USGA executive in his nineties. All these figures, from the marquee names to the unknowns, have changed the game. What they all share is a game that courses through their collective veins like a drug.

Was golf better back in the day? Men in Green weaves a history of the modern game that is personal, touching, inviting, and new. This meditation on aging and a celebration of the game is “a nostalgic visit and reminiscence with those who fashioned golf history…and should be cherished” (Golf Digest).

Michael Bamberger was born in Patchogue, New York, in 1960. After graduating from the University of Pennsylvania in 1982, he worked as a newspaper reporter, first for the (Martha’s) Vineyard Gazette, later for The Philadelphia Inquirer. After twenty-two years at Sports Illustrated, he is now a senior writer for GOLF magazine and Golf.com. He and his wife, Christine, live in Philadelphia.

"This is the golf version of Roger Kahn's classic The Boys of Summer." —Chicago Tribune

“Until roughly the mid-1980s, the PGA Tour really was a tour, not the geographically-dispersed collection of big-money events that it is today. The players and often their wives drove from event to event or hopped on chartered flights together. . . . In a new book, Men in Green, author Michael Bamberger re-creates that tour through a series of surprisingly candid interviews with players, caddies, wives, and others who were there. It is a world of booze-fueled friendships and feuds, of deep bonds and annoyances, of hurts that still fester and memories that still glow. Braiding it all together is the power and addiction of golf. . . . Bamberger doesn’t flinch at portraying the Tour’s earthier aspects. Drugs, sex, and alcohol, although not sensationalized, take their appropriate place in his narrative. But the book is overwhelmingly a love song. . . . Above all, what comes through is the sense of the Tour back then as an extended family, sometimes dysfunctional but never dull.” —John Paul Newport, The Wall Street Journal

“Michael Bamberger is a hard-boiled reporter with a sly wit, but his bottom-line virtue is empathy. That’s made him the most penetrating and insightful golf writer of our time. Men in Green is Bamberger at his best: revealing secrets, puncturing myths, adjudicating never-settled feuds. His new book has the suspenseful urgency of a detective novel, a cast of characters out of a Fellini movie, and the heart of a Charlie Brown Christmas special. If I could have only one golf book on a deserted island, Men in Green would be that book.”
—John Garrity, author of Ancestral Links

“Men in Green is peppered with appealing vignettes—such as Billy Harmon on what Bob Goalby said to himself standing over a four-foot putt on the last hole of the 1968 Masters—but Bamberger has a higher purpose. Identifying legends and trying to find out what makes them tick, he and Donald provide exceptional insight into some of America’s greatest players over the last half-century.” —The Philadelphia Inquirer

“To be cherished . . . Will entertain and enthrall . . . A nostalgic visit and reminiscence with those who fashioned golf history.” —Golf Digest