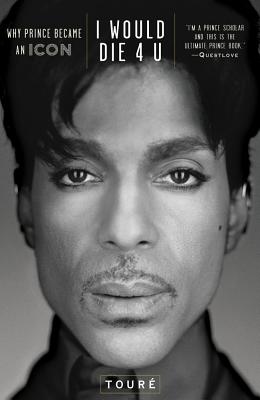 By Touré
$19.99
In Stock at Publisher - Available to Ship to Your Home

Though I was never a huge fan of Touré's work, he has hit the jackpot here with a true love of a subject he knows very well. Evolved from a series of lectures at Harvard, this is Prince as icon, as emissary of God, religion, sex, ego, brilliance. This is the psyche and soul of a musician at war with himself and an era.

Celebrated journalist, TV personality, and award-winning author Touré investigates one of the most enigmatic and fascinating figures in contemporary American culture: Prince.

Celebrated journalist, TV personality, and award-winning author Touré investigates one of the most enigmatic and fascinating figures in contemporary American culture:

Drawing on new research and enlivened by Touré’s unique pop-cultural fluency, I Would Die 4 U relies on surprising and in-depth interviews with Prince’s band members, former girlfriends, musicologists, and even Bible scholars to deconstruct the artist’s life and work.

Prince’s baby boomer status allowed him to play a wise older brother to the latchkey kids of generation X. Defying traditional categories of race, gender, and sexuality, he nonetheless presents a very traditional conception of religion and God in his music. He was an MTV megastar and a religious evangelist, using images of sex and profanity to invite us into a musical conversation about the healing power of God. By demystifying the man and his music, I Would Die 4 U shows us how Prince defined a generation.

Touré is a writer, TV host, and host of the influential podcast The Touré Show. He writes for Rolling Stone, The New York Times, The New Yorker, The Washington Post, The Nation, Vogue, and many other publications. A former cohost of MSNBC’s The Cycle, he is also the author of Who’s Afraid of Post-Blackness?, a New York Times and Washington Post Notable Book, and three other books. He lives in Brooklyn with his wife and daughter.

"I'm a Prince scholar and this is the ultimate Prince book."
— Questlove

Toure is one of my favorite writers and Prince is on the Mount Rushmore of modern music and this is the best book about Prince I've ever read.
— Q-Tip

“It took the singular talent and journalistic skills of Toure to capture the wild genius and larger than life influence of Prince.”
— Jann Wenner, founder of Rolling Stone

“For those who understand how singular an artist Prince is, this book -- every bit obsessive and revelatory as its subject -- will be a great pleasure. For everyone else, it¹s mandatory. It unfolds like a good mystery, as cryptic clues are deciphered one after another.”
— Joe Levy, Editor, Billboard

In terms of creativity, energy, influence, and sheer virtuosity, few musicians in my lifetime rival Prince -- and in Toure, he's met his perfect authorial match. As a fanboy of both, I was waiting excitedly for this book, but it's even better than I expected. In these illuminating pages, Toure reveals Prince as an artist and cultural force in full.
— John Heilemann, coauthor of Game Change and Double Down (forthcoming)

"Based on his Du Bois Lectures at Harvard, Toure has written a thoughtful and compelling book that is both a full and sensitive explication of the genius of Prince's music, as well as his exemplary role as an seminal figure in contemporary American culture. It is must reading for any student of popular culture."
— Henry Louis Gates, Jr.

“A worthwhile addition to the relatively small number of decent books about Prince. It’s certainly bound to be a conversation (or possibly debate) starter for serious Prince fans.”
— The Morton Report

Praise for Who's Afraid of Post-Blackness?:

“Touré demolishes the notion that there is only one way to be racially authentic . . . funny, hip and current.” –Gwen Ifill, The Washington Post

“One of the most acutely observed accounts of what it is like to be young, black, and middle-class in America. Touré inventively draws on a range of evidence . . . for a performance carried through with unsparing honesty.” —Orlando Patterson, The New York Times Book Review

“[T]he ever provocative Touré boldly articulates the complicated issues of self and racial identity in the age of Obama.” —Vanity Fair

“A personal and scholarly dissection of race issues in modern America. . . . With the help of an array of writers, performers, comedians, artists and intellectuals, among others, the author attempts to reach a consensus on what is typical or otherwise for African-Americans, as well as what Black identity means in the modern era. Yet despite the chorus of voices, the most powerful voice belongs to Touré. While his collected anecdotal evidence provides a necessary framework, his personal experiences with race ring loudest of all. A likely bellwether for America's future struggles with race.” —Kirkus Reviews

“A welcome response to the ‘self-appointed identity cops’ who would arrest and banish those they consider insufficiently black. Perceptively analyze[s] a new sensibility in black art and culture to illustrate the complex and fluid racial identification Touré dubs ‘post-blackness.’” —San Francisco Chronicle

“Touré candidly tackles a burning issue confronting us today. Black America is undeniably a community ‘free, but not equal,’ and people from all walks of life are compelled to devise new approaches to confronting today’s structural inequalities. Here Touré explores insights from many perspectives to help guide the way.” —Reverend Jesse L. Jackson, Sr.

“This book is quintessential Touré: smart, funny, irreverent, and provocative as hell. Rejecting old school racial dogma and new school myths about post-raciality, he offers a powerful and original thesis on the status of Blackness in the 21st century. Through his sharp analysis and honest reflections, Touré challenges us to embrace a more mature, sophisticated, and ultimately liberating notion of racial identity. Any serious conversation on race and culture must begin with this book.”
—Dr. Marc Lamont Hill, Columbia University Professor and host of “Our World With Black Enterprise”

“Who's Afraid of Post-Blackness is a necessary book. To fulfill your potential as an individual or as a people, you need a clear sense of self. Touré has done the difficult but liberating work of moving the discussion of race beyond the Black Power-era thinking of the 1970's into the 21st Century.”
— Reggie Hudlin, filmmaker

“A fascinating conversation among some of America’s most brilliant and insightful Black thinkers candidly exploring Black identity in America today. Touré powerfully captures the pain and dissonance of Black Americans’ far too often unrequited love for our great nation.”
—Benjamin Todd Jealous, President and CEO of the NAACP

“Who's Afraid of Post-Blackness is a tour de force! I applaud Touré’s courage in standing up and telling it like it is. This special book will make you think, laugh, cry—and it will make you look at race and at yourself differently.”
—Amy DuBois Barnett, Editor-in-Chief, Ebony

“Touré has taken a question I have asked myself uncountable times over the course of my life and asked it of everyone: ‘What does it mean to be Black?’ The answers in this book are thought-provoking, uplifting, hilarious and sometimes sad. His sharp writing and self-effacing stories help digest some hard facts about how identity can be used for and against each of us – and why it matters so much to all of us.”
—Soledad O’Brien, CNN anchor and special correspondent

"[An] apostle of the hip-hop aesthetic." —Darryl Pinckney, New York Review of Books

"Touré is one of our nation’s most astute and witty observes of the American scene. Not only is he one of the most gifted writers of his generation, but his sharp insight, poetic phrasing, and biting humor—and his brilliant command of so many aspects of pop culture—make his dazzling performance on page a sheer joy to read.” —Michael Eric Dyson, Georgetown University

"Touré is an exceptional journalist...He is—if you can imagine it—Oscar Wilde as a street thug.  This is the marvelous tone he's been able to achieve." —Tom Wolfe

"Touré has the sarcasm, intellect, and dogged nose for narrative that has made him his generation’s premiere chronicler of the chaos, ambition, and boundary-crossing that have accompanied African-American culture’s rude and ingenious takeover of American Pop, Inc.” —Greg Tate

"From 50 Cent to Dale Earnhardt, Jr., we sent Touré out on stories and he got it, whatever it was, every time. His work is like his subjects: stylish, vivid, and burning with energy.”—Jann Wenner, founder of Rolling Stone