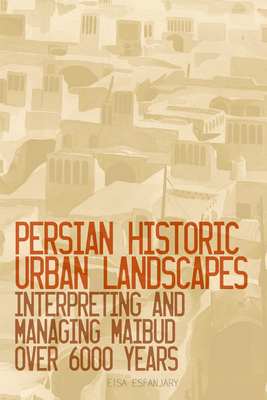 Persian cities are part of a corridor of civilisation with settlements straddling thousands of years. Taking Maibud as a case study, Eisa Esfanjary traces the evolution of ancient settlements chronologically, thematically and methodologically.

Maibud provides the basis from which a new interpretive approach is developed, being a city that has a history of several millennia yet has a scale that renders it manageable with archaeological remains that range across several phases of building development. An archetypal example of middle-sized Persian cities, it affords insights into the entire urban landscape and its spatial, functional and morphological iterations. Within this overall picture, a methodology is developed to explore various morphological elements of the city, the three key components of which are the town plan, the building type, and construction materials. The inter-relationships between these three components are explained in order to formulate an approach to support the management and conservation of the historic urban landscape.

Eisa Esfanjary is currently an Assistant Professor of Architectural and Urban Conservation at the Art University of Isfahan. His interests are principally concerned with: the historical development and evolution of towns and cities and understanding the underlying pattern of formation and transformation; how a particular settlement is structured and how it has matured; what features have been changed over time and what elements have been sustained in the urban landscape; and how best we can preserved what we have inherited.