The Spitfire: Exploring the Myths and Legacy of an Icon (Hardcover) 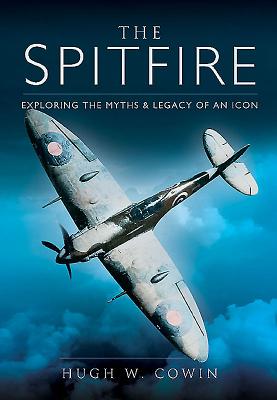 History has shown the Spitfire to be the right aircraft in the right place at the right time, of that there is more than ample evidence. Indeed, the very name Spitfire has become as indelibly woven into the unfolding story of the Second World War as those of its chief human protagonists, Churchill, Hirohito, Hitler, Roosevelt and Stalin.

Hugh Cowin lays to rest many of the myths and plain misinformation contained in numerous earlier chronicles. Spanning the decades between the Spitfire's infancy and its final departure from operational service, this fascinating work opens up and explores a whole host of aspects all too frequently ignored. Sensitive yet vital aspects brought to light include the tragically hard-won Battle of Britain combat lessons, borne of the Spitfire's inadequate armament and its torch propensity when hit. More positive and negative aspects of the design were only to emerge post-War, as a result of increases in engine power. These, combined with operational developments, are explained simply, making the narrative more of an enthralling yarn than a dry history. To help the reader keep focussed on the Spitfire/Seafire's place in the broader scheme of things, Cowin intersperses his narrative with straightforward comparisons between the Spitfire and its fighter contemporaries, friend and foe.

This substantial, highly readable narrative history contains well over 150 photographs and diagrams and really is a must-read volume for all serious aviation enthusiasts.