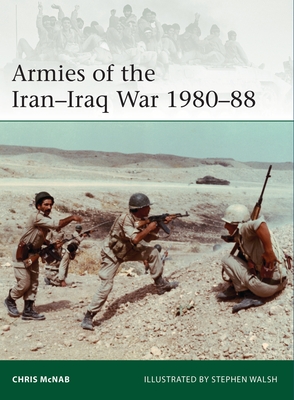 This study explores the organization, appearance, and equipment of both sides' ground forces during the Iran–Iraq War (1980–88).

Driven by the Iranian Revolution of 1979 and the insecurities it provoked in Saddam Hussein's Iraqi dictatorship, the Iran–Iraq War would become the largest conventional conflict of the period. Curiously little-known considering its scale and longevity, the struggle between Iran and Iraq was primarily fought along the 1,458km border in a series of battles which, despite both sides being armed with modern small arms, armour and aircraft, often degenerated into attritional struggles reminiscent of World War I. Such a comparison was underlined by frequent periods of deadlock, the extensive use of trenches by both sides, and the deployment of chemical weapons by Iraq. Fully illustrated with specially commissioned artwork, this study investigates the organization, appearance and equipment of the ground forces of both sides in the Iran–Iraq War, including Iraq's Republican Guards and Iran's Pasdaran or Islamic Revolutionary Guard Corps. The war resulted in stalemate with some half a million dead and at least as many wounded. The financial costs incurred in waging such a long and debilitating war were one of the spurs that led Saddam Hussein to invade Kuwait barely two years later, setting in motion one of the defining currents of recent Middle-Eastern history.

Dr Chris McNab specializes in military history and related technology. To date he has published more than 100 books including US Soldier vs German Soldier (2020), Hitler's Tanks (2020) and The Great Bear at War (2019). Chris has also written extensively for major encyclopaedia series, magazines and newspapers. He lives in South Wales, UK.

STEPHEN WALSH studied art at the North East Wales Institute and has worked as a professional illustrator since 1988. Since then he has illustrated a variety of books and games including Settlers of Catan. His projects for Osprey include such diverse subjects as the battle of Otterburn, the Chinese army from 1937 to 1949, and the US Home Front in World War II.