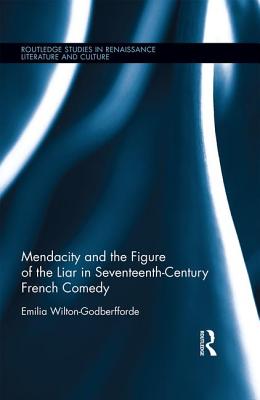 By Emilia Wilton-Godberfforde
$160.00
This book is out of stock indefinitely, unable to order at this time.

The first book-length study devoted to this topic, Mendacity and the Figure of the Liar in Seventeenth-Century French Comedy offers an important contribution to scholarship on the theatre as well as on early modern attitudes in France, specifically on the subject of lying and deception. Unusually for a scholarly work on seventeenth-century theatre, it is particularly alert to plays as performed pieces and not simply printed texts. The study also distinguishes itself by offering original readings of Moli re alongside innovative analyses of other playwrights. The chapters offer fresh insights on well-known plays by Moli re and Pierre Corneille but also invite readers to discover lesser-known works of the time (by writers such as Benserade, Thomas Corneille, Dufresny and Rotrou). Through comparative and sustained close readings, including a linguistic and speech act approach, a historical survey of texts with an analysis of different versions and a study of irony, the reader is shown the manifest ways in which different playwrights incorporate the comedic tropes of lying and scheming, confusion and unmasking. Drawing particular attention to the levels of communicative or mis-communicative exchanges on the character-to-character axis and the character-to-audience axis, this work examines the process whereby characters in the comedies construct narratives designed to trick, misdirect, dazzle, confuse or exploit their interlocutors. In the different incarnations of seducer, parasite, cross-dresser, duplicitous narrator/messenger and deluded mythomaniac, the author underscores the way in which the figure of the liar both entertains and troubles, making it a fascinating subject worthy of detailed investigation.