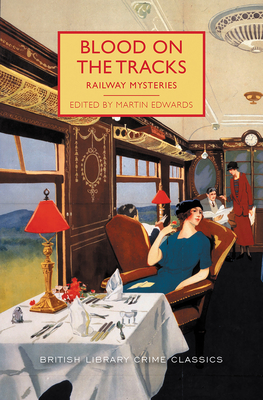 Bite-sized, train-related whodunits from an assortment of classic mystery writers and some you won't have heard of. There is no better summer reading. Or subway reading. Or bathtub reading. Or "I estimate that in approximately ten minutes I will pass out" bedtime reading.

Discover the captivating treasures buried in the British Library's archives. Largely inaccessible to the public until now, these enduring classics were written in the golden age of detective fiction.

"This is the perfect volume for fans of short, high-quality, fair-play detective fiction." —Publishers Weekly

A signalman is found dead by a railway tunnel. A man identifies his wife as a victim of murder on the underground. Two passengers mysteriously disappear between stations, leaving behind a dead body.

Trains have been a favourite setting of many crime writers, providing the mobile equivalent of the "locked-room" scenario. Their enclosed carriages with a limited number of suspects lend themselves to seemingly impossible crimes. In an era of cancellations and delays, alibis reliant upon a timely train service no longer ring true, yet the railway detective has enjoyed a resurgence of popularity in the twenty-first century.

Both train buffs and crime fans will delight in this selection of fifteen railway-themed classic mysteries, featuring some of the most popular authors of their day alongside less familiar names. This is a classic short story collection to beguile even the most wearisome commuter.

These fascinating mystery stories are:

The Body in the Dumb River

Blood on the Tracks

Martin Edwards is an award-winning crime writer best known for two series of novels set in Liverpool and the Lake District. He is series consultant for British Library Crime Classics, the Vice Chair of the Crime Writers' Association, and President of the Detection Club. The Golden Age of Murder, his study of the Detection Club, was published in 2015 to international acclaim, and has been nominated for both the Edgar and Agatha awards for the year's best book about the genre. He received the CWA 2020 Diamond Dagger Award for sustained excellence in crime writing and significant contributions to the genre, joining the ranks of Sue Grafton, Ian Rankin, and Lee Child.