Searching for Stonewall Jackson: A Quest for Legacy in a Divided America (Hardcover) 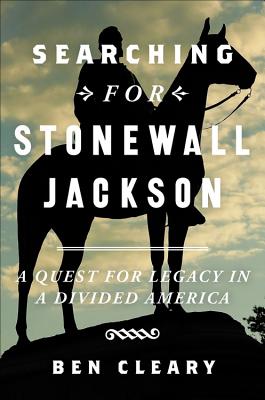 Historian Ben Cleary takes readers beyond the legend of Stonewall Jackson and directly onto the Civil War battlefields on which he fought, and where a country once again finds itself at a crossroads.
Thomas Jonathan "Stonewall" Jackson was the embodiment of Southern contradictions. He was a slave owner who fought and died, at least in part, to perpetuate slavery, yet he founded an African-American Sunday School and personally taught classes for almost a decade. For all his sternness and rigidity, Jackson was a deeply thoughtful and incredibly intelligent man. But his reputation and mythic status, then and now, was due to more than combat success. In a deeply religious age, he was revered for a piety that was far beyond the norm. How did one man meld his religion with the institution of slavery? How did he reconcile it with the business of killing, at which he so excelled?
In SEARCHING FOR STONEWALL JACKSON, historian Ben Cleary examines not only Jackson's life, but his own, contemplating what it means to be a white Southerner in the 21st century. Now, as statues commemorating the Civil War are toppled and Confederate flags come down, Cleary walks the famous battlefields, following in the footsteps of his subject as he questions the legacy of Stonewall Jackson and the South's Lost Cause at a time when the contentions of politics, civil rights, and social justice are at a fever pitch.
Combining nuanced, authoritative research with deeply personal stories of life in the modern American South, SEARCHING FOR STONEWALL JACKSON is a thrilling, vivid portrait of a soldier, a war, and a country still contending with its past.

Ben Cleary is a writer and teacher who lives in Mechanicsville, Virginia.

"Ben Cleary's decades-long fascination with the Civil War was stoked in part by his awareness that Stonewall Jackson and his soldiers had marched past the site of Cleary's Virginia home in 1862. Intrigued by Jackson's military genius and baffling personality, he set forth on a quest to understand both and to probe the meaning of the war by following in Jackson's footsteps. Civil War experts and neophytes alike will find the results of his quest to be a rewarding reading experience."—James M. McPherson, Pulitzer Prize-winning and New York Times bestselling author of Battle Cry of Freedom

"It takes a particular kind of courage to launch an admiring portrait of a Confederate icon into today's political climate. Happily, Ben Cleary's SEARCHING FOR STONEWALL JACKSON is thoughtful, nuanced, and sensitive to the political realities, then and now."—John Strausbaugh, award-winning author of Victory City and City of Sedition

"In Searching for Stonewall Jackson, historian Ben Cleary proves that a complicated past is always more fascinating and thought-provoking than one without controversy. Thomas Jonathan Jackson was an American both remarkable and tragic: A West Point graduate, a Mexican War hero, and a deeply religious slave owner who led Confederate armies in one victory after another. And while there are those today who would prefer to erase all evidence of Jackson's existence, Cleary's absorbing personal journey into the Southern general's legacy shows us that Jackson is as firmly fixed in our historical consciousness as he and his Virginians were at Bull Run some 158 years ago. Like it or not."—p.p1 {margin: 0.0px 0.0px 0.0px 0.0px; font: 12.0px Arial}Mark Lee Gardner, award-winning author of Rough Riders: Theodore Roosevelt, His Cowboy Regiment, and the Immortal Charge Up San Juan Hill

"More than a century and half after its end, the Civil War and its legacy continues to arouse passionate debate. How today's Americans memorialize our nation's bloodiest conflict have caused heated disagreements and even violent confrontations. In Searching for Stonewall Jackson, Ben Cleary revisits those places where one the war's most famous warriors fought his battles and earned his renown. Along the way, the author offers us a finely written, thoughtful, and needed portrait of both that terrible struggle and its controversial meaning. It is a journey worth taking for contemporary Americans who are mindful of our shared past."—p.p1 {margin: 0.0px 0.0px 0.0px 0.0px; font: 12.0px Arial; color: #424242}span.s1 {color: #2c2c2c}Jeffry D. Wert, author, A Glorious Army: Robert E. Lee's Triumph 1862-1863

"Cleary provides a thoughtful, accessible look into both Jackson and the continued relevance of the Civil War."—Publishers Weekly

"Cleary...is both sensitive and sensible, and readers along the way will learn both of Jackson's gallantry and the essential wrongness of the enterprise for which he died. An honest, searching book sure to tread on the toes of supremacists and iconoclasts alike."—Kirkus