Mo' Meta Blues: The World According to Questlove (Paperback) 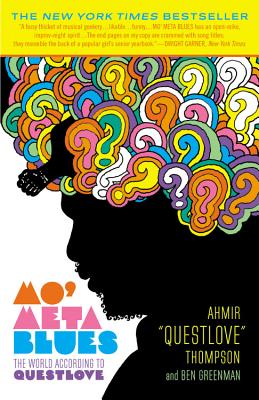 "Believe the fuss—much intense contemplation of 70s and 80s soul music (and rock & experimental jazz) as historical "memory". Philosophical concerns with the nature of music, and who we are. Hip-hop. Philly. The Beach Boys."

"You have to bear in mind that [Questlove] is one of the smartest motherf*****s on the planet. His musical knowledge, for all practical purposes, is limitless." --Robert Christgau

A punch-drunk memoir in which Everyone's Favorite Questlove tells his own story while tackling some of the lates, the greats, the fakes, the philosophers, the heavyweights, and the true originals of the music world. He digs deep into the album cuts of his life and unearths some pivotal moments in black art, hip hop, and pop culture.

Ahmir "Questlove" Thompson is many things: virtuoso drummer, producer, arranger, Late Night with Jimmy Fallon bandleader, DJ, composer, and tireless Tweeter. He is one of our most ubiquitous cultural tastemakers, and in this, his first book, he reveals his own formative experiences--from growing up in 1970s West Philly as the son of a 1950s doo-wop singer, to finding his own way through the music world and ultimately co-founding and rising up with the Roots, a.k.a., the last hip hop band on Earth. Mo' Meta Blues also has some (many) random (or not) musings about the state of hip hop, the state of music criticism, the state of statements, as well as a plethora of run-ins with celebrities, idols, and fellow artists, from Stevie Wonder to KISS to D'Angelo to Jay-Z to Dave Chappelle to...you ever seen Prince roller-skate?!?

But Mo' Meta Blues isn't just a memoir. It's a dialogue about the nature of memory and the idea of a post-modern black man saddled with some post-modern blues. It's a book that questions what a book like Mo' Meta Bluesreally is. It's the side wind of a one-of-a-kind mind.

It's a rare gift that gives as well as takes.

It's a record that keeps going around and around.

Ahmir Thompson, also known as Questlove, is the drummer and co-founder of the Grammy award-winning hip hop band The Roots. He is also a world-renowned producer, arranger, and songwriter. In 2009, The Roots became the house band on Late Night with Jimmy Fallon. Questlove has over 2.4 million followers on Twitter and has been known to DJ damn near every night of his life.

Ben Greenman is an editor at the New Yorker and the author of several acclaimed books of fiction, including Superbad, Please Step Back, and What He's Poised to Do. As a journalist and critic, he has written widely on music and pop culture. His most recent novel is The Slippage. He lives in Brooklyn and has never been known to DJ, ever.

"Attention White Girls: Stop reading about vampires and read what Questlove has to say instead. Mo' Meta Blues is a magical kaleidoscope about a high concept, low maintenance genius named Ahmir. Like him, it's smart, funny, sweet and in a thousand places at once. Read it or rot on your vine."
--Amy Poehler

"Questlove is an artistic giant and spiritual genius whose roots go back to Curtis Mayfield and so many others. This book is a gem to read and a joy to feel! Don't miss it!"
--Dr. Cornel West


"I truly love this book. I felt like I was having a conversation with Ahmir, and I may have even said aloud a few times, "What? No way!" It's everything I want to know about someone who is obsessed with music...his love for music (contemporary/revolutionary/cool) is tireless. I am forever a fan of Questlove's fanaticism."
--Fred Armisen


"A busy thicket of musical geekery . . . likable . . . funny . . . MO' META BLUES has an open-mike, improv-night spirit . . . The end pages on my copy are crammed with song titles; they resemble the back of a popular girl's senior yearbook." --Dwight Garner, New York Times

"Smart, funny, insightful . . . [The] joy of this book is getting to live inside Questlove's jam-packed, restless brain for a while . . . Four stars." --Rolling Stone

"MO' META BLUES isn't just a memoir. It's a dialogue about the nature of memory and the idea of a postmodern black man saddled with some postmodern blues. It's the side wind of a one-of-a-kind mind. It's a rare gift that gives as well as takes. It's a record that keeps going around and around.

"[MO' META BLUES] is incredible . . . [Questlove is] one of the more unabashed music geeks to ever walk the earth . . . a student of music and pop culture. But, as the book demonstrates, Thompson is also a wonderful storyteller." --Pitchfork.com

"A thoughtful, incisive analysis of hip hop-and pop music in general-from one of its foremost contemporary architects . . . a book with as much warmth, heart, and humor as introspective intelligence. Fanatics and newcomers to the music will both find plenty of revelation here." --Kirkus Reviews (starred review)

"After reading it, you'll feel like you know Questlove. The book is intimate and funny. Plus, you'll come away with a crash course in hip-hop history." --NPR.org