Eichmann in Jerusalem: A Report on the Banality of Evil (Compact Disc) 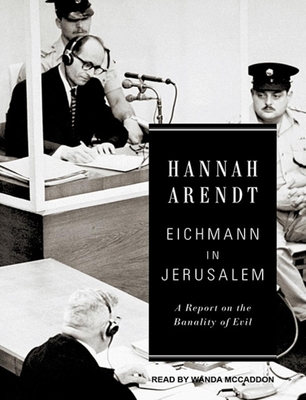 By Hannah Arendt, Wanda McCaddon (Narrated by)
$39.99
This book is out of stock indefinitely, unable to order at this time.

Sparking a flurry of heated debate, Hannah Arendt's authoritative and stunning report on the trial of German Nazi leader Adolf Eichmann first appeared as a series of articles in the New Yorker in 1963. This revised edition includes material that came to light after the trial, as well as Arendt's postscript directly addressing the controversy that arose over her account. A major journalistic triumph by an intellectual of singular influence, Eichmann in Jerusalem is as shocking as it is informative-an unflinching look at one of the most unsettling (and unsettled) issues of the twentieth century.

Hannah Arendt (1906-1975) was an influential German political theorist and philosopher whose works include "The Origins of Totalitarianism," "The Human Condition," and "Eichmann in Jerusalem."

Wanda McCaddon has narrated well over six hundred titles for major audio publishers and has earned more than twenty-five Earphones Awards from "AudioFile" magazine. She has also won a coveted Audie Award, and "AudioFile" has named her one of recording's Golden Voices.