Diary of an 8-Bit Warrior: From Seeds to Swords: An Unofficial Minecraft Adventure (Paperback) 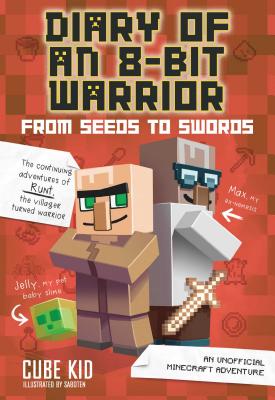 This is book number 2 in the Diary of an 8-Bit Warrior series.

Book 2 of the international best-selling 8-Bit Warrior series that takes readers inside the journal of Runt, a young Minecraft villager who dares to dream of becoming a Minecraft warrior!

THESE ARE THE REAL BOOKS BY CUBE KID! DIARY OF AN 8-BIT WARRIOR: FROM SEEDS TO SWORDS â€‹WAS ORIGINALLY PUBLISHED AS WIMPY VILLAGER KINDLES 5-8.

Pet slimes. A potion brew-off. A creepy forest that no one will explain. What’s a twelve-year-old warrior-in-training to do?

As Runt and his friends continue their battle preparation, they face their biggest challenges yet—and it’s not just those zombies decked out in body armor (which is really weird, by the way). Runt’s got a brand new nemesis who will stop at nothing to claim the top spot in the warrior competition at school. And, to make matters worse, there’s a strange girl following him around wherever he goes. But old enemies will become new allies as the town rallies to save the school from a series of mysterious mob attacks. Can Runt and his friends take down the biggest, baddest boss mob yet?

The adventures continue in this second installment of the unofficial Minecraft diary series by Cube Kid.

Cube Kid is the pen name of Erik Gunnar Taylor, a 33-year-old author who lives in Alaska. A fan of video games—and particularly Minecraft—he started writing fanfiction at a very young age. His first novel, The Diary of a Minecraft Villager, was self-published as an ebook in February 2015 and quickly became tremendously successful in the Minecraft community. The novel was acquired by the French publisher Édi8, and was published for the first time in France in February 2016 under the title LE JOURNAL D'UN NOOB, with new illustrations by Saboten. The Diary of a Minecraft Villager sparked worldwide interest.
When he is not writing, Cube Kid loves travelling, fixing his car, voraciously reading fanfiction . . . and gaming!