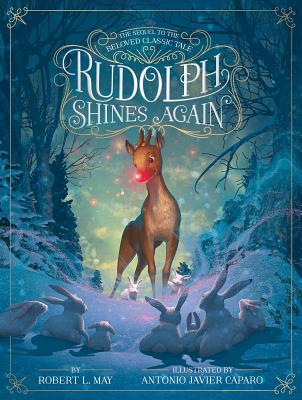 By Robert L. May, Antonio Javier Caparo (Illustrator)
$17.99
Not On Our Shelves - Available to Order

The original follow-up to the classic Rudolph the Red-Nosed Reindeer—written in verse by his creator, Robert L. May—now with charming new illustrations!

Every year at Christmastime, everyone—young and old alike—has one catchy, joy-inspiring song stuck in their heads: “Rudolph the Red-Nosed Reindeer!” Now fans of the most famous reindeer of all can travel to the North Pole again in this enchanting and uplifting holiday story, written by Robert L. May in 1939.

It’s another dark, snowy Christmas Eve and Santa needs Rudolph to guide his sleigh. But Rudolph’s nose has lost its bright red glow! Certain there’s no way he’ll be of any use to Santa this Christmas, Rudolph runs away. But on his journey, something magical happens—by helping strangers in need, Rudolph rediscovers his inner light and becomes a hero once more!

Robert L. May created Rudolph in 1939, when his company, the Montgomery Ward department stores, asked him to write a Christmas story that they could give away to customers. Drawing on the tale of “The Ugly Duckling,” Mr. May penned the story of a sweet, homely reindeer shunned because of his glowing red nose. Little did he know his creation was destined to become a Christmas holiday classic. Over the next few years, the company distributed millions of copies of Rudolph the Red-Nosed Reindeer. The book’s copyright was transferred to Mr. May in 1947, and under his ownership, Rudolph’s popularity soared. Commercial printings and cartoons quickly followed, and then, of course, came the song, which secured Rudolph’s place in Christmas history, and in our hearts, forever. Robert L. May died in 1976.

Antonio Javier Caparo is a Cuban-born illustrator and designer. Although much of his early career was spent in graphic design, his passion for animation and comics led him to devote himself to illustration—both traditional and digital. He has been published around the world and has won numerous awards in multiple countries. He lives in Quebec, Canada.