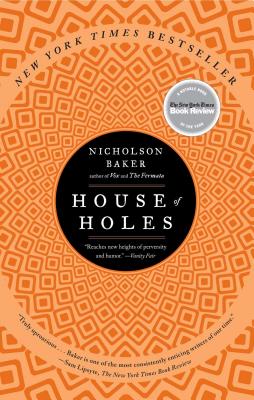 Shandee finds a friendly arm at a granite quarry. Ned drops down a hole in a golf course. So begins Nicholson Baker’s fuse-blowing sexual escapade—a modern-day Hieronymus Boschian bacchanal set in a pleasure resort where normal rules don’t apply. House of Holes, one of the most talked-about books in recent memory, is a gleefully provocative novel sure to surprise, amuse, and arouse.

Nicholson Baker is the author of nine novels and four works of nonfiction, including Double Fold, which won a National Book Critics Circle Award, and House of Holes, a New York Times Notable Book of the Year. His work has appeared in The New Yorker, Harper’s, and The New York Review of Books. He lives in Maine with his family.

“Truly uproarious . . . Baker is one of the most consistently enticing writers of our time.” —Sam Lipsyte, front cover of The New York Times Book Review

“House of Holes is as funny as it is filthy. . . . When he is not writing about sex (and also when he is), Baker is one of the most beautiful, original, ingenious prose stylists to have come along in decades.” —Charles McGrath, The New York Times Magazine

“A sexy, disturbing, funny book: It may also challenge the usual reader of literary novels with its sheer dazzling excess of imagination.” —Kate Roiphe, Slate

“Awe-inducing . . . A joyful, almost Chaucerian book . . . Had Dr. Seuss been a slightly insane pornographer, he might have written a book like this.” —Tom Bissell, GQ

“A funny, frisky novel that brings sexy back in a way that Justin Timberlake never dreamed . . . Reminds us that books can be fun and sexy, that literature can have just as much raw energy and liberating chaos as a good f*ck.” —Mark Haskell Smith, Los Angeles Review of Books

“A world of universal arousal is common enough in pornography, but Baker has fully realized its comic possibilities . . . [He] can conjure fantastical sexual scenarios and unspool yards of charmingly filthy dialogue.” —Elaine Blair, The New York Review of Books