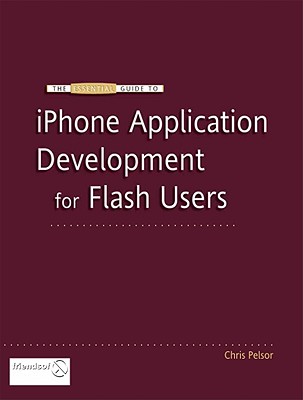 This book will serve as an introduction to Objective-C for those developers with an understanding of ActionScript. For a Flash developer who never developed for Mac OS X, contemplating this switch can be a daunting idea. When compared side by side, the environment used to build Flash applications and the iPhone SDK are not all that dissimilar, and this book will help Flash developers recognize those similarities and use that knowledge to create engaging iPhone applications for their clients.

This book will help anyone who is building Flash applications to add "iPhone applications" to their arsenal of skills. Learn how to develop for iPhone Transfer your skills from ActionScript to Objective-C Master the iPhone SDK.

James Eberhardt is co-founder of Echo Mobile and a Technical Director with over 13 years of experience of leading convergent media projects, and works with production companies to deliver content and stories to audiences through any available screen particularly the ubiquitous screens of mobile devices. James has been the Technical Director on award winning websites such as theborder.ca, shortsinmotion.com, burnttoastopera.com, thisisdanielcook.com, and thisisemilyyeung.com. It is through projects such as these that he has brought games, video, contests and other content to cell phone users. In 2007 shortsinmotion.com won the "Best Made for Mobile Video Service" at the Global Mobile Awards, and the "Mobile Program Enhancement Award" at the Banff World Television Awards. In 2008, theborder.ca launched the first nationwide mobile contest to use QR Codes, a mobile technology that is quickly gaining popularity around the world. This mobile contest for The Border won the award for the category "Mobile Program Enhancement Award" at the Banff World Television Awards in June 2008. He currently teaches at Ryerson University and the Rich Media Institute in Toronto. In 2006 James was invited to teach Flash Lite for mobile devices at China's foremost university for design, the Central Academy of Fine Arts; and returned in 2007 for another teaching engagement. He has also taught at George Brown College in Toronto. James is an advisory board member for Seneca College's Digital Media Arts program. He has spoken on the topic of mobile technologies at colleges and universities, as well as conferences such as FITC and Doc: IT!. In 2006 he was the recipient of the "Programmer of the Year" award at the Canadian New Media Awards. Previously James was Technical Director for marblemedia, Lead Architect for Infinet Communications, and Team Lead for extendMedia. He graduated from Ryerson University with a Bachelor of Applied Arts in New Media."