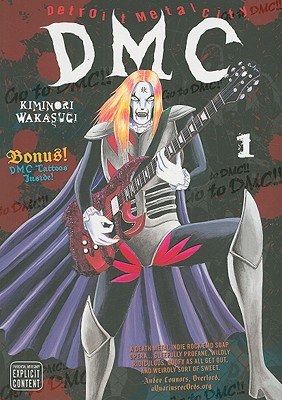 This is book number 1 in the Detroit Metal City series.

By all appearances, Soichi Negishi is a sweet, well-mannered boy who likes Swedish pop music, trendy boutiques, and all things fashionable. But at the same time he's also Krauser II, front man for Detroit Metal City, an indie death metal band whose popularity increases by the day. Once the DMC makeup goes on and Soichi takes the stage, his natural talent as a death metal god can't help but flourish. Is this the band he's truly destined to be in?

How did this happen? When and where did I go wrong? This is not the kind of band I wanted to be in!

Kiminori Wakasugi was born in Oita Prefecture in 1975. In 1998, he was the recipient of the Incentive Award, one of Young Magazine's monthly manga awards. In that same year, he debuted with Boku no Migite wo Shirimasenka? (Do You Know Where My Right Hand Is?) in Young Magazine Zokan Aka BUTA. After working as a manga assistant, in 2004 he (somewhat irregularly) released Amaresu Ken-chan (Ken the Amateur Wrestler) in Young Magazine Uppers, and the following year, he began the death metal-themed gag manga Detroit Metal City, which runs in Young Animal. With its distinct style, explicit dialogue and '80s era manga parodies, this series has gained immense cult popularity, especially on the Internet.