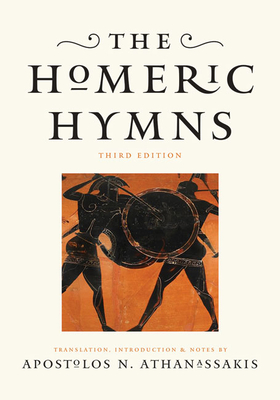 The best-selling, essential, and straightforward translation of the Homeric Hymns, accompanied by an expanded introduction and updated expert notes.

A rich source for students of Greek mythology and literature, the Homeric Hymns are also fine poetry. Attributed by the ancients to Homer, these prooimia, or preludes, were actually composed by various poets over centuries. They were performed at religious festivals as entertainment meant to stir up enthusiasm for far more ambitious compositions that followed them, namely the Iliad and Odyssey. Each of the thirty-three poems is written in honor of a Greek god or goddess. Together, the hymns provide a fascinating view into the ancients' view of deities.

In this long-awaited third edition of his acclaimed translations of the hymns, Apostolos Athanassakis preserves the vigor and the magic of the ancient text while modernizing traditional renditions of certain epithets and formulaic phrases. He avoids lengthening or truncating lines, thereby crafting a symmetrical text, and makes an effort to keep to an iambic flow without sacrificing accuracy. Athanassakis enhances his classic work with a new index of names and topics, updated bibliography, revised genealogical charts, and careful and selective changes in the translations themselves. An expanded introduction addresses ancient reception of the hymns. Numerous additions to the notes, reflecting over twenty-five years of scholarship, draw on modern anthropological and archaeological research to explore prominent themes and religious syncretism within the poems. These materials all enrich the reader's experience of these ancient and influential poems.

Apostolos N. Athanassakis is professor emeritus in the Department of Classical Studies at the University of California, Santa Barbara, where he held the Argyropoulos Chair in Hellenic Studies from 2001 to 2011. Among his many translations is Hesiod: Theogony, Works and Days, Shield.