The Cheese and the Worms: The Cosmos of a Sixteenth-Century Miller (Paperback) 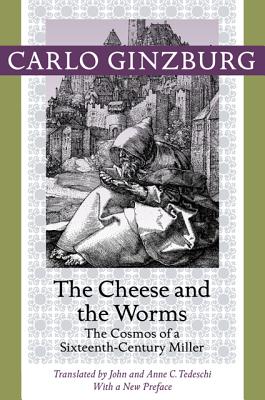 The now-classic tale of a sixteenth-century miller facing the Roman Inquisition.

The Cheese and the Worms is an incisive study of popular culture in the sixteenth century as seen through the eyes of one man, the miller known as Menocchio, who was accused of heresy during the Inquisition and sentenced to death. Carlo Ginzburg uses the trial records to illustrate the religious and social conflicts of the society Menocchio lived in.

For a common miller, Menocchio was surprisingly literate. In his trial testimony he made references to more than a dozen books, including the Bible, Boccaccio's Decameron, Mandeville's Travels, and a mysterious book that may have been the Koran. And what he read he recast in terms familiar to him, as in his own version of the creation: All was chaos, that is earth, air, water, and fire were mixed together; and of that bulk a mass formed--just as cheese is made out of milk--and worms appeared in it, and these were the angels.

Ginzburg's influential book has been widely regarded as an early example of the analytic, case-oriented approach known as microhistory. In a thoughtful new preface, Ginzburg offers his own corollary to Menocchio's story as he considers the discrepancy between the intentions of the writer and what gets written. The Italian miller's story and Ginzburg's work continue to resonate with modern readers because they focus on how oral and written culture are inextricably linked. Menocchio's 500-year-old challenge to authority remains evocative and vital today.

Carlo Ginzburg has taught at the University of Bologna, the University of California, Los Angeles, and the Scuola Normale Superiore di Pisa. The recipient of the 2010 International Balzan Prize, he is author of The Night Battles: Witchcraft and Agrarian Cults in the Sixteenth and Seventeenth Centuries and Clues, Myths, and the Historical Method, also published by Johns Hopkins.