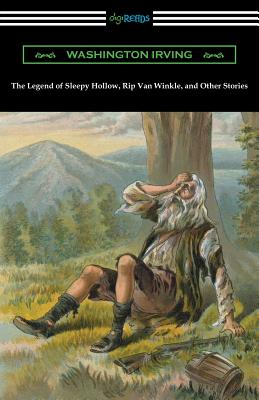 By Washington Irving, Charles Addison Dawson (Introduction by)
$9.99
Not On Our Shelves - Available to Order

"The Legend of Sleepy Hollow, Rip Van Winkle, and Other Stories" is a volume of essays and short stories by Washington Irving that were first published serially between 1819 and 1820 and was originally collected as "The Sketch Book of Geoffrey Crayon, Gent." It includes some of the works for which would establish Irving as one of the preeminent American authors of his day and cement his literary legacy. The most famous of the works in this volume are arguably "The Legend of Sleepy Hollow" and "Rip Van Winkle." The first is the story of Ichabod Crane, a schoolmaster from Connecticut who has moved to the New York countryside settlement of Tarry Town whose secluded glen called Sleepy Hollow is haunted by an infamous spectre, the Headless Horseman. The second story "Rip Van Winkle" tells the tale of a Dutch-American villager living during the time of the American Revolution who mysteriously falls asleep in New York's Catskill Mountains only to discover when he awakes that many years have passed and much has changed. Along with these two classic tales thirty-two other stories and essays are included. This edition is printed on premium acid-free paper, includes an introduction by Charles Addison Dawson, and a preface by the author.