The Terrible Two Get Worse (Paperback) 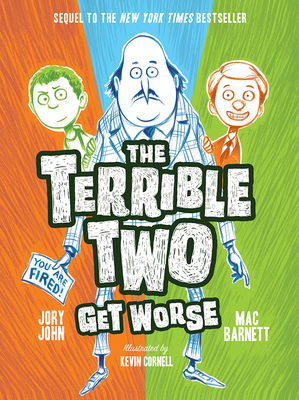 Two pranksters are better than one in the second book in the hilarious New York Times bestselling series by Mac Barnett and Jory John!

Miles Murphy and Niles Sparks are great at being terrible.

Nearly every day the fearsome pranking duo turns Yawnee Valley Science and Letters Academy upside down with their stunts. The Big Chirp. The Cafeteria Calamity. Their pranks bring joy to their classmates and embarrassment to their nemesis: blowhard Principal Barkin.

But one day—school picture day, to be precise—a scheme goes too far, and Principal Barkin ends up fired. His replacement: Principal Barkin Senior, the principal’s no-nonsense father. The new principal runs the school with an iron fist, out to destroy all signs of fun. No group work. No Pajama Day. And definitely no pranking.

In this second book in the sly and silly illustrated series, bestselling authors Mac Barnett and Jory John prove once again that pranks in the hands of the powerless can be tools of justice—and hilarity.

Mac Barnett is the coauthor of the Terrible Two series and the author of many picture books, which have won multiple Caldecott Honors. Claire Keane studied graphic design in Paris before moving to Los Angeles, where she worked at Walt Disney Feature Animation for 10 years and contributed to Frozen, Tangled, Enchanted, and many other films. She now lives in Venice Beach, California, where she writes and illustrates children’s books.

Jory John is a New York Times bestselling author of books for both children and adults. He is a two-time E.B. White Read-Aloud Honor recipient. Jory's work includes the picture books Giraffe Problems and Penguin Problems, both illustrated by Lane Smith, the Goodnight Already! series, illustrated by Benji Davies, The Bad Seed and The Good Egg, both illustrated by Pete Oswald, and the award-winning Quit Calling Me a Monster!, illustrated by Bob Shea. He also co-authored numerous humor books, including the internationally bestselling All My Friends Are Dead. Jory spent six years as programs director at 826 Valencia, a nonprofit educational center in San Francisco. He resides in Oregon.

Kevin Cornell is the illustrator of many children’s books. He lives in Philadelphia.