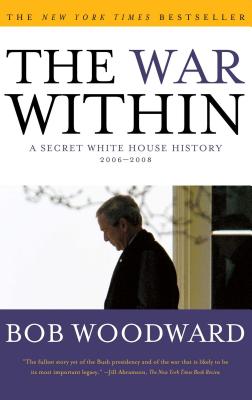 Bob Woodward once again pulls back the curtain on Washington to reveal the inner workings of a government at war in his fourth book on President George W. Bush.

The War Within provides an exhaustive account of the struggles of General David Petraeus, who takes over in Iraq during one of the bleakest and most violent periods of the war. It reveals how breakthroughs in military operations and surveillance account for much of the progress as violence in Iraq plummeted in the middle of 2007.

Woodward interviewed key players, obtained dozens of never-before-published documents, and had nearly three hours of exclusive interviews with President Bush. The result is a stunning, firsthand history of the years from mid-2006, when the White House realizes the Iraq strategy is not working, through the decision to surge another 30,000 U.S. troops in 2007, and into mid-2008, when the war becomes a fault line in the presidential election.

The War Within addresses head-on questions of leadership, not just in war but in how we are governed and the dangers of unwarranted secrecy.

Bob Woodward is an associate editor at The Washington Post where he has worked for 50 years. He has shared in two Pulitzer Prizes, one for his Watergate coverage and the other for coverage of the 9/11 terrorist attacks. He has authored 20 national bestselling books, 14 of which have been #1 New York Times bestsellers.

"A better first draft of history might be difficult to find." -- Gilbert Cruz, Time

"More than mere anecdotal detail, this is the stuff of history... The fine detail is wonderfully illuminating, and cumulatively these books may be the best record we will ever get of the events they cover... They stand as the fullest story yet of the Bush presidency and of the war that is likely to be its most important legacy." -- Jill Abramson, The New York Times Book Review

"...recalls David Halberstam's iconic The Best and the Brightest...The War Within's controversial revelations are contentions and numerous...But, mainly, it is a study of what happens when men and women, charged with leading the country in wartime or with counseling those who lead, do not tell each other what they really think." -- Josiah Bunting, III, The Washington Post

"An extraordinary window into policy making." -- The Kansas City Star

"The In Cold Blood of national security journalism." -- The Nation

"If you want to know about the Iraq War, Bob Woodward is the guy." -- Bill O'Reilly

"Bob Woodward is the latest to remind us that it is presidents, not their understudies, who shape the destiny of nations." -- Fouad Ajami, The Wall Street Journal