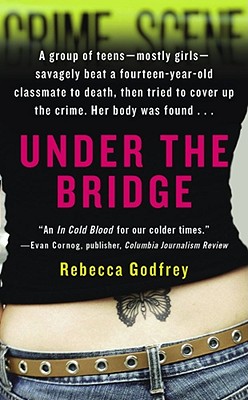 By Rebecca Godfrey
Unavailable, our apologies.
Hard to Find

Who were the seemingly ordinary teenagers who beat and killed a girl who longed to be their friend? And how could they hide the murder from their parents and teachers and the police for eight days?

Drawing on six years of research -- including interviews with the accused -- acclaimed writer Rebecca Godfrey answers these questions in this stunning account of the notorious "Schoolgirl Murder." Through a skillful blend of hard journalism and riveting narrative, Godfrey takes us into the bedrooms and classrooms of a powerful hip-hop-obsessed clique and the loner-victim who just wanted to belong, then into the police stations and courtrooms where adults -- grieving, devastated -- must reckon with the shocking crime. Highlighting along the way the deeply entrenched social tensions that provoked the murder, Under the Bridge is more than a true-crime book -- it is an unforgettable wake-up call.

Rebecca Godfrey is an award-winning novelist and journalist. Her first novel, The Torn Skirt, was a national bestseller and a finalist for the Ethel Wilson Fiction Prize. Under The Bridge received one of Canada’s largest literary awards, the British Columbia Award for Canadian Nonfiction, as well as the Arthur Ellis Award for Excellence in Crime Writing. She holds an MFA from Sarah Lawrence College, and has received fellowships from Yaddo and The MacDowell Colony. In 2016, she edited and curated the multimedia exhibition, Girls In Trees. She teaches writing at Columbia University, and lives with her family in upstate New York.

"Intelligent...insightful...will be remembered for years."
-- The Baltimore Sun