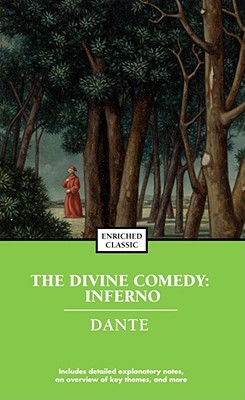 The first volume of The Divine Comedy—Dante begins his downward journey through the seven circles of Hell.

Considered to be one of the greatest literary works of all time, Dante's immortal drama of a journey through Hell is the first volume of his Divine Comedy. In the Inferno, Virgil guides Dante the pilgrim-poet through the depths of Hell, which is organized by the categories and subcategories of the sinners who dwell there. Dante first encounters the seven deadly sins on his journey—lust, gluttony, avarice, wrath and sloth—and then goes on to encounter even greater wickedness on his downward descent, before finally confronting the "evil worm" Lucifer, who flaps his wings while gnawing a hole into God's creation.

This edition includes:
-A concise introduction that gives readers important background information
-A chronology of the author's life and work
-A timeline of significant events that provides the book's historical context
-An outline of key themes and plot points to help readers form their own interpretations
-Detailed explanatory notes
-Critical analysis, including contemporary and modern perspectives on the work
-Discussion questions to promote lively classroom and book group interaction
-A list of recommended related books and films to broaden the reader's experience

Dante was born in Florence, Italy, in 1265. Heir of a poor but noble family, he was one of the seven elected officials in charge of the government of Florence. Civil war was common in Florence at the time and the issues were further complicated by the question of Papal influence. In 1300, Dante along with his fellow magistrates confirmed anti-papal measures. When in 1302, the French prince acting under orders from the Pope captured power in Florence, Dante was sentenced on charges of corruption and opposition to the Church and exiled from Florence on pain of execution by burning if he ever returned. He spent the rest of his life in exile, pining for his native city. He withdrew from active politics to a large extent and concentrated on his literary creations.

We do not know exactly when Dante began work on The Divine Comedy. He had been moving about from court to court after his exile and 1n 1317 had settled at Ravenna, where he completed his great work. Extant correspondence shows that the first and second parts of The Divine Comedy, the "Inferno" and the "Purgatario" were generally known around 1319. The last part, the "Paradiso" was completed only in 1321. Dante died at Ravenna on 14 September 1321 and the last thirteen Cantos of the "Paradiso" were published posthumously.