The Language of Baklava: A Memoir (Paperback) 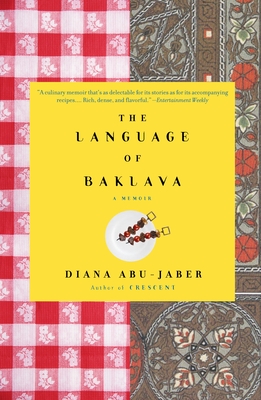 Diana Abu-Jaber’s vibrant, humorous memoir weaves together delicious food memories that illuminate the two cultures of her childhood—American and Jordanian. Here are stories of being raised by a food-obsessed Jordanian father and tales of Lake Ontario shish kabob cookouts and goat stew feasts under Bedouin tents in the desert. These sensuously evoked repasts, complete with recipes, paint a loving and complex portrait of Diana’s impractical, displaced immigrant father who, like many an immigrant before him, cooked to remember the place he came from and to pass that connection on to his children. The Language of Baklava irresistibly invites us to sit down at the table with Diana’s family, sharing unforgettable meals that turn out to be as much about “grace, difference, faith, love” as they are about food.

Diana Abu-Jaber is the author of four novels, including Crescent, which was awarded the 2004 PEN Center USA Award for Literary Fiction and the Before Columbus Foundation’s American Book Award and was named one of the twenty best novels of 2003 by The Christian Science Monitor; and Arabian Jazz, which won the 1994 Oregon Book Award and was nominated for the PEN/Faulkner Award; as well as two memoirs. She teaches at Portland State University and divides her time between Portland and Miami. www.dianaabujaber.com

"A culinary memoir that's as delectable for its stories as for its accompanying recipes. . . . Rich, dense, and flavorful" —Entertainment Weekly

"Wonderful, touching and funny. . . . Honest and precise. . . . Abu-Jaber explores [her cultural] duality with a generous spirit and clear-eyed vision. . . . A lush and lyrical memoir." —The Miami Herald

"Incredibly powerful. . . . The world described is so strange and sumptuous, the characters so large and comedic, and the descriptions of the food so enveloping and mouthwatering that you want to climb into this world and make it your own." —The Oregonian

"Exquisite. . . . With humor and grace, the author explores timeless topics of love, cultural adjustments and what being rootless means. . . . [Abu-Jaber] takes us on an insightful journey. . .we ought not to miss." —The Seattle Times