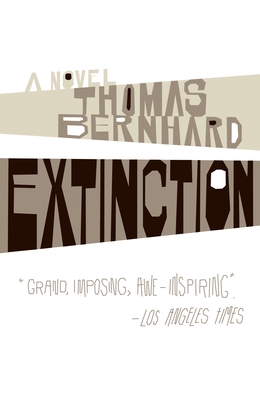 The last work of fiction by one of the twentieth century’s greatest artists, Extinction is widely considered Thomas Bernhard’s magnum opus.

Franz-Josef Murau—the intellectual black sheep of a powerful Austrian land-owning family—lives in Rome in self-imposed exile, surrounded by a coterie of artistic and intellectual friends. On returning from his sister’s wedding on the family estate of Wolfsegg, having resolved never to go home again, Murau receives a telegram informing him of the death of his parents and brother in a car crash. Not only must he now go back, he must do so as the master of Wolfsegg. And he must decide its fate. Written in the seamless, mesmerizing style for which Bernhard was
famous, Extinction is the ultimate proof of his extraordinary literary genius.

Thomas Bernhard was born in Holland in 1931 and grew up in Austria. He studied music at the Akademie Mozarteum in Salzburg. In 1957 he began a second career, as a playwright, poet, and novelist. The winner of the three most distinguished and coveted literary prizes awarded in Germany, he has become one of the most widely translated and admired writers of his generation. He published nine novels, an autobiography, one volume of poetry, four collections of short stories, and six volumes of plays. Thomas Bernhard died in Austria in 1989.

“Strangely gripping. . . . A highly original kind of writing that resembles musical patterns of theme, variations and recapitulation. . . . A fine and compelling prose accomplishment.”
—The Washington Times

“With a breathtaking sustained intensity . . . Bernhard assaults through the voice of Murau the modern world, as exemplified by his birthplace, Austria.”
—Chicago Tribune

“The particular fineness of Extinction lies in its depiction of a consciousness in action: Murau, it turns out, can be weak, admirable, reprehensible or mean-spirited, but his mind, as depicted on the page, seems absolutely true to life.”
—Washington Post Book World

“Not every raving maniac is a genius. Many are called but few are chosen. It’s a pretty exclusive club, but Bernhard made it. . . . Like Swift, Bernhard writes like a sacred monster. . . . He is a remarkable literary performer: a man who goes to extremes in ways that vivify our sense of human possibilities, however destructive.”
—The Wall Street Journal