Turing's Cathedral: The Origins of the Digital Universe (Paperback) 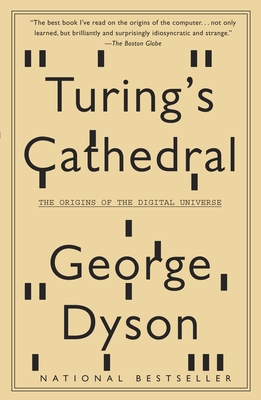 In this revealing account of how the digital universe exploded in the aftermath of World War II, George Dyson illuminates the nature of digital computers, the lives of those who brought them into existence, and how code took over the world.

In the 1940s and ‘50s, a small group of men and women—led by John von Neumann—gathered in Princeton, New Jersey, to begin building one of the first computers to realize Alan Turing’s vision of a Universal Machine. The codes unleashed within this embryonic, 5-kilobyte universe—less memory than is allocated to displaying a single icon on a computer screen today—broke the distinction between numbers that mean things and numbers that do things, and our universe would never be the same. Turing’s Cathedral is the story of how the most constructive and most destructive of twentieth-century inventions—the digital computer and the hydrogen bomb—emerged at the same time.

George Dyson is a science historian as well as a boat designer and builder. He is also the author of Baidarka, Project Orion, and Darwin Among the Machines.

“The best book I’ve read on the origins of the computer. . . not only learned, but brilliantly and surprisingly idiosyncratic and strange.”
—The Boston Globe

“A technical, philosophical and sometimes personal account . . . wide-ranging and lyrical.”
—The Economist

“The story of the [von Neumann] computer project and how it begat today’s digital universe has been told before, but no one has told it with such precision and narrative sweep.”
—The New York Review of Books

“A fascinating combination of the technical and human stories behind the computing breakthroughs of the 1940s and ‘50s. . . . An important work.”
—The Philadelphia Inquirer

“Vivid. . . . [A] detailed yet readable chronicle of the birth of modern computing. . . . Dyson’s book is one small step toward reminding us that behind all the touch screens, artificial intelligences and cerebellum implants lies not sorcery but a machine from the middle of New Jersey.”
—The Oregonian

“Well-told. . . . Dyson tells his story as a sort of intellectual caper film. He gathers his cast of characters . . . and tracks their journey to Princeton. When they converge, it’s great fun, despite postwar food rationing and housing shortages. . . . Dyson is rightly as concerned with the machine’s inventors as with the technology itself."
—The Wall Street Journal

“Charming. . . . Creation stories are always worth telling, especially when they center on the birth of world-changing powers. . . . Dyson creatively recounts the curious Faustian bargain that permitted mathematicians to experiment with building more powerful computers, which in turn helped others build more destructive bombs.”
—San Francisco Chronicle

“The story of the invention of computers has been told many times, from many different points of view, but seldom as authoritatively and with as much detail as George Dyson has done. . . . Turing’s Cathedral will enthrall computer enthusiasts. . . . Employing letters, memoirs, oral histories and personal interviews, Dyson organizes his book around the personalities of the men (and occasional woman) behind the computer, and does a splendid job in bringing them to life.”
—The Seattle Times

“A powerful story of the ethical dimension of scientific research, a story whose lessons apply as much today in an era of expanded military R&D as they did in the ENIAC and MANIAC era . . . Dyson closes the book with three absolutely, hair-on-neck-standing-up inspiring chapters on the present and future, a bracing reminder of the distance we have come on some of the paths envisioned by von Neumann, Turing, et al.”
—Cory Doctorow, Boing Boing

“No other book about the beginnings of the digital age . . . makes the connections this one does between the lessons of the computer’s origin and the possible paths of its future.”
—The Guardian

“If you want to be mentally prepared for the next revolution in computing, Dyson’s book is a must read. But it is also a must read if you just want a ripping yarn about the way real scientists (at least, some real scientists) work and think.”
—Literary Review

“More than just a great book about science. It’s a great book, period.”
—The Globe and Mail