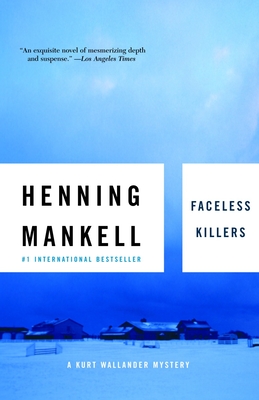 This is book number 1 in the Kurt Wallander Series series.

The mystery thriller series that inspired the Netflix crime drama Young Wallander • From the dean of Scandinavian noir, the first riveting installment in the internationally bestselling and universally acclaimed Kurt Wallander series.

It was a senselessly violent crime: on a cold night in a remote Swedish farmhouse an elderly farmer is bludgeoned to death, and his wife is left to die with a noose around her neck. And as if this didn’t present enough problems for the Ystad police Inspector Kurt Wallander, the dying woman’s last word is foreign, leaving the police the one tangible clue they have–and in the process, the match that could inflame Sweden’s already smoldering anti-immigrant sentiments.

Unlike the situation with his ex-wife, his estranged daughter, or the beautiful but married young prosecuter who has peaked his interest, in this case, Wallander finds a problem he can handle. He quickly becomes obsessed with solving the crime before the already tense situation explodes, but soon comes to realize that it will require all his reserves of energy and dedication to solve.

Henning Mankell is the internatinally acclaimed, bestselling author of the Kurt Wallander novels.  Mankell's novels have been translated into forty-five languages and have sold more than forty million copies worldwide. He was the first winner of the Ripper Award and also received the Glass Key and the Crime Writers’ Association Golden Dagger, among other awards. His Kurt Wallander mysteries have been adapted into a PBS television series starring Kenneth Branagh. During his life, Mankell divided his time between Sweden and Mozambique, where he was artistic director of the Teatro Avenida in Maputo. He died in 2015.

“An especially satisfying crime novel, like those of such past masters as Georges Simenon, Nicholas Freeling, and Sweden's own Maj Sjowall and Per Wahloo.” —The Wall Street Journal

“Intelligent, moving and topical, this is a thriller of the very best kind.” —The Times (London)

“A well-crafted police procedural, the story moves along at a brisk pace and comes to an exciting climax.” —St. Louis Post-Dispatch