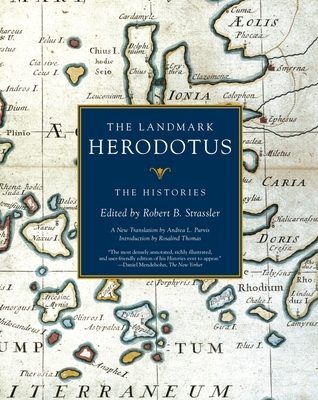 From the editor of the widely praised The Landmark Thucydides, a new Landmark Edition of The Histories by Herodotus.

Cicero called Herodotus "the father of history," and his only work, The Histories, is considered the first true piece of historical writing in Western literature. With lucid prose, Herodotus's account of the rise of the Persian Empire and its dramatic war with the Greek city sates set a standard for narrative nonfiction that continues to this day. Illustrated, annotated, and filled with maps—with an introduction by Rosalind Thomas, twenty-one appendices written by scholars at the top of their fields, and a new translation by Andrea L. Purvis—The Landmark Herodotus is a stunning edition of the greatest classical work of history ever written.

Bob Strassler, a graduate of Harvard and Harvard Business School, where he was a Baker Scholar, is the president of Riverside Capital Management Corp., and an unaffiliated scholar whose articles have appeared in the Journal of Hellenic Studies. He received an honorary degree as Doctor of Humanities and Letters from Bard College in 1996. A viola da gamba musician, he is the chairman of the Aston Magna Foundation for Music and the Humanities.

“The most densely annotated, richly illustrated, and user friendly edition of his Histories ever to appear.”—Daniel Mendelsohn, The New Yorker“A first-rate achievement. Nothing is missing.... Like a Global Positioning System for Herodotus's world. Strassler has made it simply impossible to get lost.”—The New York Sun“Stunning.... Bears the same superb production and scholarly qualities of his earlier The Landmark Thucydides.... Andrea Purvis' new translation is taut and lucid.”—Houston Chronicle“A real service. . . .Considerably improves accessibility by integrating hundreds of maps and extensive timelines, amplifies the first historian's own epic accomplishment.”—Forbes