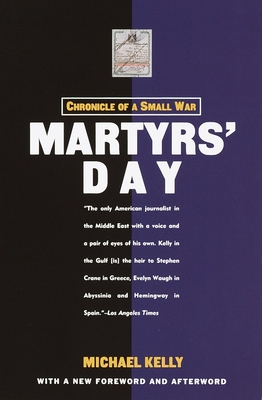 Michael Kelly, who traveled through every country touched by the Gulf War, moved about as a free-lance journalist for the Boston Globe and the New Republic. He traveled through much of the Middle East during and after the Gulf War, watching the bombs fall on Baghdad and waiting for Scuds in Tel Aviv, inspecting the gold bathroom fixtures installed by the U.S. Army Corps of Engineers in the empire’s temporary palace in Kuwait City and dining with Kurdish chieftains in remote mountain camps in northern Iran.

When ground war in Iraq began, Michael Kelly rented a four-wheel-drive Nissan Safari, borrowed some camouflage pants and gas-proof rubber gloves, and set off across the desert, where he was mistaken for an advance party of the American Army and surrendered to by a batch of bewildered Iraqi soldiers. In Kuwait after the liberation, he listened to horrific tales of torture and rape, and walked among the grotesque remains of the bombed-out retreating Iraqi army on the roads home. Later, when Kelly went to Kurdistan, he hiked into forbidden Iraqi territory and then traveled with various guerrilla bands at war with Saddam Hussein. He got out of Iraq by swimming across a river into Turkey in the company of smugglers. Kelly’s story is witty, moving, and dramatically compelling, at once superb reporting and the very best travel writing. By avoiding the human story of the Gulf War, he has given us an indispensable piece of our history.

“Restrained yet explosive dispatches from the front . . . Kelly demonstrates a keen eye for the telling detail, a well-developed sense of irony . . . courage and enterprise.”—National Magazine