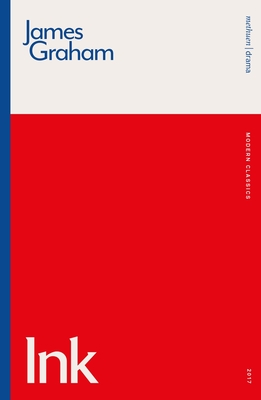 I want to tell you a story. And it's true. That's what makes it a good fucking story, right, 'cause all the best stories are true.

Fleet Street. 1969. The Sun rises. James Graham's ruthless, red-topped play leads with the birth of this country's most influential newspaper - when a young and rebellious Rupert Murdoch asked the impossible and launched its first editor's quest, against all odds, to give the people what they want.

Ink premiered at the Almeida Theatre in London before transferring to the West End and later Broadway. It was nominated for both the Olivier and Tony Award for Best New Play.

James Graham's plays include: This House (National Theatre and West End- Olivier Award and Evening Standard Award nominated for Best Play), Ink (Almeida Theatre), Monster Raving Loony(Theatre Royal Plymouth and Soho Theatre), The Vote broadcast live onto television on the night of the general election 2015 (Donmar Warehouse), Privacy (Donmar Warehouse and Public Theater New York), The Angry Brigade (Theatre Royal Plymouth and Bush Theatre) and the book for the Finding Neverland musical on Broadway. As Writer in Residence at the Finborough Theatre his plays include Eden's Empire - winner of the Catherine Johnson Best Play Award - The Man, and Sons of York. Writing for TV includes: Coalition (Channel 4), Prisoner's Wives (BBC1) and Caught In a Trap (ITV1). Writing for film includes: X Plus Y. He is currently working on Gypsy Boy for BBC Films, and a film adaptation of 1984.