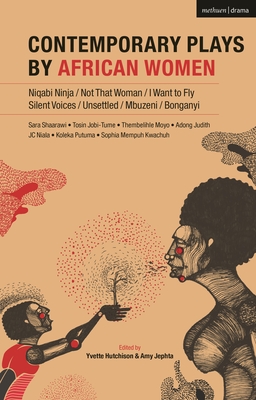 By Yvette Hutchison (Editor), Amy Jephta (Editor), Sophia Kwachuh Mempuh
$33.95
On Our Shelves Now - Available to Ship to Your Home

This volume uniquely draws together seven contemporary plays by a selection of the finest African women writers and practitioners from across the continent, offering a rich and diverse portrait of identity, politics, culture, gender issues and society in contemporary Africa.

Niqabi Ninja by Sara Shaarawi (Egypt) is set in Cairo during the chaotic time of the Egyptian uprising.

I Want To Fly by Thembelihle Moyo (Zimbabwe) tells the story of an African girl who wants to be a pilot. It looks at how patriarchal society shapes the thinking of men regarding lobola (bride price), how women endure abusive men and the role society at large plays in these issues.

Silent Voices by Adong Judith (Uganda) is a one-act play based on interviews with people involved in the LRA and the effects of the civil war in Uganda. It critiques this, and by implication, other truth commissions.

Unsettled by JC Niala (Kenya) deals with gender violence, land issues and relations of both black and white Kenyans living in, and returning to, the country.

Mbuzeni by Koleka Putuma (South Africa) is a story of four female orphans, aged eight to twelve, their sisterhood and their fixation with death and burials. It explores the unseen force that governs and dictates the laws that the villagers live by.

Bonganyi by Sophia Kwachuh Mempuh (Cameroon) depicts the effects of colonialism as told through the story of a slave girl: a singer and dancer, who wants to win a competition to free her family.

Each play also includes a biography of the playwright, the writer's own artistic statement, a production history of the play and a critical contextualisation of the theatrical landscape from which each woman is writing.

Yvette Hutchison is a Reader in the Department of Theatre & Performance Studies at the University of Warwick. She is associate editor of the South African Theatre Journal and recently co-edited African Theatre 14: Contemporary Women (James Currey, 2015). Her AHRC funded African Women Playwrights' Network project (awpn.org, 2015-17) is using mobile app technology to create a virtual network of women theatre practitioners living in Africa with other artists, researchers and interested parties on the continent and beyond. Her research is considering the aesthetics contemporary South African women artists are using to address issues of gender and conflict.Amy Jephta is a bilingual Cape Town-based playwright and director with an MA in Theatre-making from the University of Cape Town. As a director, she was the first national recipient of the Baxter Theatre/TAAC Emerging Theatre Director's Bursary and is an alumni of the Lincoln Center Theater Directors Lab in New York. She has worked as a mentor to community theatre groups based in Kwazulu-Natal as part of the Twist Theatre project, has been part of the South African New Plays Writing Programme at Wits University, and has been a voice and acting lecturer at CityVarsity in Cape Town and Simon Fraser University in Vancouver. As a playwright, her work has been published in South Africa, performed at the Riksteatern in Stockholm and the Bush Theatre in London (on a grant from the UK Arts Council), where she is also currently undertaking a two year international playwriting residency with the Royal Court Theatre. She currently teaches bilingual acting to theatre and performance students at the University of Cape Town and is a conference director for the 2015 Women Playwrights International Conference.