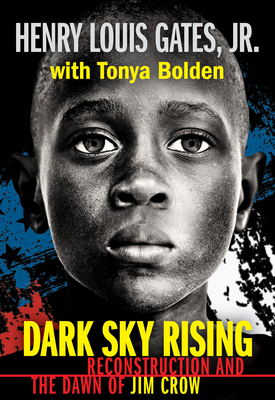 Henry Louis Gates, Jr. presents a journey through America's past and our nation's attempts at renewal in this look at the Civil War's conclusion, Reconstruction, and the rise of Jim Crow segregation.
This is a story about America during and after Reconstruction, one of history's most pivotal and misunderstood chapters. In a stirring account of emancipation, the struggle for citizenship and national reunion, and the advent of racial segregation, the renowned Harvard scholar delivers a book that is illuminating and timely. Real-life accounts drive the narrative, spanning the half century between the Civil War and Birth of a Nation. Here, you will come face-to-face with the people and events of Reconstruction's noble democratic experiment, its tragic undermining, and the drawing of a new "color line" in the long Jim Crow era that followed. In introducing young readers to them, and to the resiliency of the African American people at times of progress and betrayal, Professor Gates shares a history that remains vitally relevant today.

Professor Henry Louis Gates, Jr. is the Alphonse Fletcher University Professor and Director of the Hutchins Center for African & African American Research at Harvard. He is an acclaimed author and critic who has unearthed literary gems. He also has produced, written, and hosted an array of documentary films for public television, including Africa's Great Civilizations, Finding Your Roots, Black America Since MLK: And Still I Rise, and The African Americans: Many Rivers to Cross. Gates is the recipient of 55 honorary degrees and numerous prizes. A member of the first class awarded "genius grants" by the MacArthur Foundation in 1981, he was, in 1998, the first African American scholar to be awarded the National Humanities Medal. In addition, he was named to Time's 25 Most Influential Americans list in 1997, Ebony's Power 150 list in 2009, and Ebony's Power 100 list in 2010 and 2012.

"Beautifully conceived and written. Dark Sky Rising: Reconstruction and the Dawn of Jim Crow is the right book at the right time. It's beyond necessary."-Holly Goldberg Sloan, New York Times bestselling author, Counting by 7s

"Brilliant and more necessary now than ever before. This is a book that should be on every bedside table and in every classroom in America. It's a history that belongs to all of us. In Gates's and Bolden's hands, it is a deeply comprehensive, beautifully illustrated, and moving narrative of survival."-Jacqueline Woodson, National Ambassador for Young People's Literature, National Book Award Winner for Brown Girl Dreaming

Praise for Henry Louis Gates, Jr.
Emmy Award Winner for Outstanding Historical Program -- Long Form, for The African Americans: Many Rivers to Cross
Peabody Award Winner for The African Americans: Many Rivers to Cross
Featured among Time magazine's "25 Most Influential Americans"
Included in Ebony magazine's "100 Most Influential Black Americans"
Named a MacArthur Fellow
Winner of four NAACP Image Awards
Selected as a National Humanities medalist
Elected to the American Academy of Arts & Letters
Chosen as the National Endowment for the Humanities Jefferson Lecturer
Inducted into the Sons of the American Revolution