Einstein's Monsters: The Life and Times of Black Holes (Hardcover) 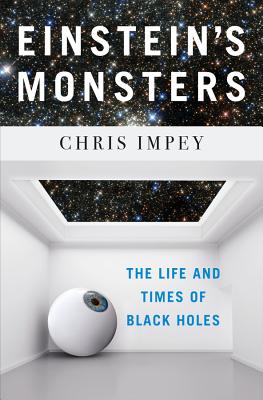 By Chris Impey
$26.95
This book is out of stock indefinitely, unable to order at this time.

The astonishing science of black holes and their role in understanding the history and future of our universe.

Black holes are the most extreme objects in the universe, and yet they are ubiquitous. Every massive star leaves behind a black hole when it dies, and every galaxy harbors a supermassive black hole at its center. Frighteningly enigmatic, these dark giants continue to astound even the scientists who spend their careers studying them. Which came first, the galaxy or its central black hole? What happens if you travel into one—instant death or something weirder? And, perhaps most important, how can we ever know anything for sure about black holes when they destroy information by their very nature?

In Einstein’s Monsters, distinguished astronomer Chris Impey takes readers on an exploration of these and other questions at the cutting edge of astrophysics, as well as the history of black holes’ role in theoretical physics—from confirming Einstein’s equations for general relativity to testing string theory. He blends this history with a poignant account of the phenomena scientists have witnessed while observing black holes: stars swarming like bees around the center of our galaxy; black holes performing gravitational waltzes with visible stars; the cymbal clash of two black holes colliding, releasing ripples in space-time.

Clear, compelling, and profound, Einstein’s Monsters reveals how our comprehension of black holes is intrinsically linked to how we make sense of the universe and our place within it. From the small questions to the big ones—from the tiniest particles to the nature of space-time itself—black holes might be the key to a deeper understanding of the cosmos.

Chris Impey is a distinguished professor in the Department of Astronomy at the University of Arizona and the critically-acclaimed author of Beyond, How It Began, and How It Ends, and four other books, as well as two astronomy textbooks. He lives in Tucson, Arizona.

Impey skillfully weaves a fascinating tale out of the work and ideas of the scientists who…pieced together the history of black holes.
— Manjit Kumar, author of Quantum - Financial Times

Black holes were originally flights of theoretical fancy, difficult for even professional physicists to wrap their brains around. In Einstein's Monsters, Chris Impey shows how modern astronomy has brought them into vivid focus, and conveys how much more we're learning about these extreme beasts with every passing year.

— Sean Carroll, author of The Big Picture: On the Origins of Life, Meaning, and the Universe Itself