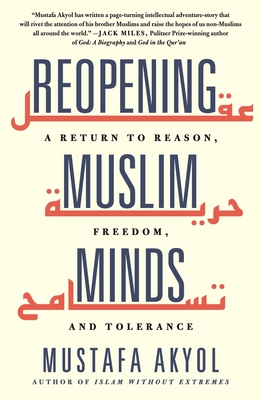 A fascinating journey into Islam's diverse history of ideas, making an argument for an "Islamic Enlightenment" today

In Reopening Muslim Minds, Mustafa Akyol, senior fellow at the Cato Institute and opinion writer for The New York Times, both diagnoses “the crisis of Islam” in the modern world, and offers a way forward. Diving deeply into Islamic theology, and also sharing lessons from his own life story, he reveals how Muslims lost the universalism that made them a great civilization in their earlier centuries. He especially demonstrates how values often associated with Western Enlightenment — freedom, reason, tolerance, and an appreciation of science — had Islamic counterparts, which sadly were cast aside in favor of more dogmatic views, often for political ends.

Elucidating complex ideas with engaging prose and storytelling, Reopening Muslim Minds borrows lost visions from medieval Muslim thinkers such as Ibn Rushd (aka Averroes), to offer a new Muslim worldview on a range of sensitive issues: human rights, equality for women, freedom of religion, or freedom from religion. While frankly acknowledging the problems in the world of Islam today, Akyol offers a clear and hopeful vision for its future.

"Much more than an impassioned defense of tolerance and reason, Mustafa Akyol takes his readers on a truly enjoyable and enlightening journey through Islamic theology and law. With brilliant wit and eloquence, Akyol has written a book of undeniable presence and power. This book should be mandatory reading for any serious student of Islam or the Muslim world."
—Dr. Khaled Abou El Fadl, Distinguished Professor of Law, UCLA School of Law, and author of Reasoning with God: Reclaiming Shari ah in the Modern Age.

"Mustafa Akyol has written a page-turning intellectual adventure-story that will rivet the attention of his fellow Muslims, and raise the hopes of us non-Muslims all around the world.”
—Jack Miles, Pulitzer Prize-winning author of God: A Biography