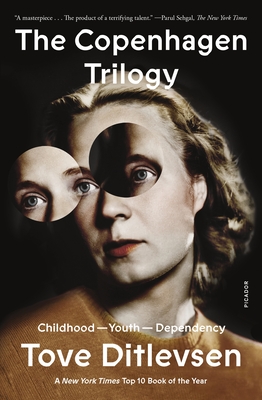 My praise can't do justice to the searing brilliance of this trilogy (autofiction before autofiction) which left me smarting and astonished. Ditlevsen is the rare writer whose voice is so distinctive (at once fragile and steely) that it defies comparison to any other. What begins as the precocious, graceful bildungsroman of an intelligent and ambitious young poet transforms, almost without warning, into something infinitely darker and frankly nightmarish. Read it and weep, then, like me, immediately read it again. - Maddie

Called “a masterpiece” by The New York Times, the acclaimed trilogy from Tove Ditlevsen, a pioneer in the field of genre-bending confessional writing.

Tove Ditlevsen is today celebrated as one of the most important and unique voices in twentieth-century Danish literature, and The Copenhagen Trilogy (1969–71) is her acknowledged masterpiece. Childhood tells the story of a misfit child’s single-minded determination to become a poet; Youth describes her early experiences of sex, work, and independence. Dependency picks up the story as the narrator embarks on the first of her four marriages and goes on to describe her horrible descent into drug addiction, enabled by her sinister, gaslighting doctor-husband.

Throughout, the narrator grapples with the tension between her vocation as a writer and her competing roles as daughter, wife, mother, and drug addict, and she writes about female experience and identity in a way that feels very fresh and pertinent to today’s discussions around feminism. Ditlevsen’s trilogy is remarkable for its intensity and its immersive depiction of a world of complex female friendships, family, and growing up—in this sense, it’s Copenhagen’s answer to Elena Ferrante’s Neapolitan novels. She can also be seen as a spiritual forerunner of confessional writers like Karl Ove Knausgaard, Annie Ernaux, Rachel Cusk, and Deborah Levy. Her trilogy is drawn from her own experiences, but reads like the most compelling kind of fiction.

Born in a working-class neighborhood in Copenhagen in 1917, Ditlevsen became famous for her poetry while still a teenager, and went on to write novels, stories, and memoirs before committing suicide in 1976. Having been dismissed by the critical establishment in her lifetime as a working-class female writer, she is now being rediscovered and championed as one of Denmark’s most important modern authors, with “Tove fever” gripping readers.

Tove Ditlevsen was born in 1917 in a working-class neighborhood in Copenhagen. Her first volume of poetry was published when she was in her early twenties and was followed by many more books, including the three volumes of the Copenhagen Trilogy: Childhood (1967), Youth (1967), and Dependency (1971). She died in 1976.

“How does great literature—the Grade A, top-shelf stuff—announce itself to the reader? . . . I bring news of Tove Ditlevsen’s suite of memoirs with the kind of thrill and reluctance that tells me this must be a masterpiece . . . [The trilogy is] the product of a terrifying talent.” —Parul Sehgal, The New York Times

"A beautifully written and relatable chronicle for the marginalized." —Patti Smith

“Romantic, spiritually macabre, and ultimately devastating . . . Like a number of dispassionate, poetic modernists—the writers Jean Rhys and Octavia Butler, say, or the visual artists Alice Neel and Diane Arbus—Ditlevsen was marked, wounded, by her own sharp intelligence . . . A wonderfully destabilizing writer, she admits to something that a more timid memoirist would never cop to: monstrous self-interest. By baring her bathos along with her genius, she makes us reflect on our own egotism.” —Hilton Als, The New Yorker

“The language is elegant—as natural, responsive, and true as wet clay—and the observations provide the pleasurable shock of precision, rather than the sort of approximation we have more reason to expect when reading . . . The experience is overwhelming—it’s as if Ditlevsen has moved into your head and rearranged all the furniture, and not necessarily for your comfort. The book is as propulsive as the most tightly plotted thriller; even when you want to put it down, it seems to adhere to your hands.” —Deborah Eisenberg, The New York Review of Books

“Read together, [the three volumes of The Copenhagen Trilogy] form a particular kind of masterpiece, one that helps fill a particular kind of void. The trilogy arrives like something found deep in an ancestor’s bureau drawer, a secret stashed away amid the socks and sachets and photos of dead lovers. The surprise isn’t just its ink-damp immediacy and vitality—the chapters have the quality of just-written diary entries, fluidly translated by Tiina Nunnally and Michael Favala Goldman—but that it exists at all.” —Megan O’Grady, The New York Times Book Review

“Ditlevsen’s gorgeous memoirs . . . together project a stunning clarity, humor and candidness, casting light not just on the world’s harsh realities but on the inexplicable impulses of our secret selves.” —The New York Times (10 Best Books of 2021)

“[Ditlevsen creates] an intimate world . . . that is both tragic and funny and contains the kind of prose that even in translation, you will want to read out loud.” —Barrie Hardymon, NPR (Best Books of 2021)

“The gradual submersion into addiction and madness is brilliantly accomplished . . . Like Tove herself, the reader is balanced on the surface of the moment, appallingly captive to events as they unfold. This sensation of immediacy—of presence—is what distinguishes The Copenhagen Trilogy from a great deal of contemporary autofiction . . . Ditlevsen’s writing is technically adroit yet feels unconscious, and it brings the reader remarkably close to experiencing the world through another person’s mind.” —Sam Sacks, The Wall Street Journal

“Ditlevsen's brilliance is evident . . . Like Grace Paley and Alice Munro, Ditlevsen's a master of compression who can capture the whole story of a marriage in a couple of pages. With a born writer's killer instinct, she likes to pounce on us with arresting chapter openings . . . She keeps telling us that she's passive and powerless, yet what makes the book hopeful is that she's anything but. Even if writing couldn't save her from herself, it lets her soar above the world's expectations and seek the truth on her own terms.” —John Powers, NPR

“There are some writers whose sentences sting like a steady stream of ice-cold water from the tap, and others whose prose feels pleasurably warm as they gradually increase the temperature. The Danish writer Tove Ditlevsen managed to do both . . . While Ditlevsen’s prose is often straightforward and uncomplicated, the effect is a hypnotic longing, the pull between desiring the life of an artist and wanting some sense of normalcy.” —Michele Filgate, The Boston Globe

“Unnervingly brilliant . . . A masterpiece . . . That all of [Ditlevsen’s] wants are presented to us with such a straight face, even when they are unflattering, is part of what gives The Copenhagen Trilogy its enormous emotional power. It is a story about wanting, about a giant and constantly vexed ambition, offered up to us simply and straightforwardly, as though the book were a pool of clear water and we can see all the way down to the bottom.” —Constance Grady, Vox

“Tove Ditlevsen’s writing is both engulfing and totally controlled. She knows things about life. But just as important, she has a rare capacity to build from the tragic blocks of her life a perfect and eviscerating story. The greatness of her writing feels like an unsolvable mystery: far away, and up above.” —Rachel Kushner, author of The Mars Room

“Elizabeth Hardwick described Joan Didion as ‘a martyr of facticity,’ characterizing her novels as elliptical, quick, and apt to self-crucify on acerbic details. This might just as well be applied to the works of the Danish writer Tove Ditlevsen . . . Her great achievement in The Copenhagen Trilogy was to compose a book that registers at once its author’s claims to continuity and the jagged contours of fact, that allows her projected salvation and terminal despair to coexist—if not in life, then at least on the page.” —Bailey Trela, The Baffler

“Like hundred-year-old glass, Ditlevsen’s writing is elegant, transparent, with glorious whorls of minor distortions and an unaffected beauty, but this seamless surface belies a scaffolding that is forbiddingly sound.” —Hannah Kofman, Los Angeles Review of Books

“No one has written about childhood quite as memorably as the Danish poet Tove Ditlevsen, or described the compulsion to write with so much hope and foreboding. Her memoirs of growing up in working-class Copenhagen before the Second World War read like Ferrante meets Fierce Attachments . . . But Ditlevsen’s brooding lyricism is all her own.” —Julie Phillips, 4Columns

“Ditlevsen is self-deprecating and effective at conveying the fish-eye view of a child in a claustrophobic environment; she understands that part of the memoirist’s job is to remember how life felt and synthesize it in a way she couldn’t have at the time. . . . Ditlevsen is a master of slow realization, quick characterization, and concise ironies.” —Lauren Oyler, Harper’s

“[The Copenhagen Trilogy] is an absolute tour de force, the final volume in particular. They’re as brilliant as I’d been led to expect, but also surprisingly intense and elegant . . . [Ditlevsen’s writing] is crystal clear and vividly, painfully raw.” —Lucy Scholes, The Paris Review

“The best books I have read this year. These volumes slip in like a stiletto and do their work once inside. Thrilling.” —John Self, New Statesman

“Both [The Copenhagen Trilogy and Elena Ferrante’s Neapolitan Novels] depict, with first-hand grittiness and luminous subjectivity, bookish girls growing up in working-class districts, whether in 1950s Naples or 1930s Copenhagen. From an artistic viewpoint, Ditlevsen’s work is the more interesting . . . She looks the slimy and intolerable in the eye and burnishes it into cut glass.” —Lucasta Miller, The Times Literary Supplement

“Astonishing, honest, entirely revealing and, in the end, devastating. Ditlevsen's trilogy is remarkable not only for its honesty and lyricism; these are books that journey deep into the darkest reaches of human experience and return, fatally wounded, but still eloquent.” —Alex Preston, Observer