This May End Badly (Hardcover) 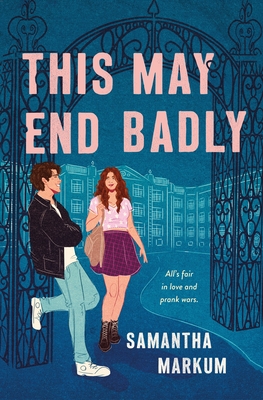 “The bitingly hilarious, heartfelt This May End Badly takes your favorite fake dating trope and adds plenty of downright delightful shenanigans that’ll have readers tearing through the pages.” - Emma Lord, New York Times bestselling author of You Have a Match

Pranking mastermind Doe and her motley band of Weston girls are determined to win the century-long war against Winfield Academy before the clock ticks down on their senior year. But when their headmistress announces that The Weston School will merge with its rival the following year, their longtime feud spirals into chaos.

To protect the school that has been her safe haven since her parents’ divorce, Doe puts together a plan to prove once and for all that Winfield boys and Weston girls just don’t mix, starting with a direct hit at Three, Winfield’s boy king and her nemesis. In a desperate move to win, Doe strikes a bargain with Three’s cousin, Wells: If he fake dates her to get under Three’s skin, she’ll help him get back his rightful family heirloom from Three.

As the pranks escalate, so do her feelings for her fake boyfriend, and Doe spins lie after lie to keep up her end of the deal. But when a teacher long suspected of inappropriate behavior messes with a younger Weston girl, Doe has to decide what’s more important: winning a rivalry, or joining forces to protect something far more critical than a prank war legacy.

This May End Badly is a story about friendship, falling in love, and crossing pretty much every line presented to you—and how to atone when you do.

Samantha Markum was born and raised in St. Louis, Missouri with an eight year intermission in Florida, where she mostly just collected sunburns. When she’s not writing, she can be found begging her dog for attention, buying too many candles, and ignoring the dust bunnies gathering in her house. When she is writing, you can find her staring at the wall in search of inspiration. She is the author of This May End Badly and You Wouldn't Dare.

Epic Reads, "The 16 Most Anticipated YA Books to Read in April"

Frolic, "Upcoming Fake Dating Romances To Read in 2021" and "Our Most Anticipated YA Reads for April 2022"

Nerd Daily, "Upcoming YA Book Releases to Add to Your TBR"

"This May End Badly is a fun, insightful novel about the challenges and rewards of saying goodbye to adolescence and growing with the people you love." - BookPage

"A charming YA rom-com that mixes a delightful array of tropes including enemies to lovers and fake dating." - Paste Magazine

"Hoo-boy, Samantha Markum’s YA debut This May End Badly is rollicking good fun from the first page to the last, with the best fake-dating romance this side of To All the Boys I've Loved! Fearless MC Doe leads her crack crew of wonderful Weston girls to out-prank the boys at their rival, Winfield, where her nemesis rules the school. The pranks are a doozy, and Doe is an absolute mastermind. When a merger of the two schools is proposed, the pranks spiral out of control, and Doe seems to lose her way until she puts her courage on the line for a cause much larger than herself. Clear the decks before you open this book: I did not put it down until I finished it seven hours later -- you won’t either! A masterful plot, confident voice, and sparkling dialogue earn Samantha Markum and the winning girls of Weston an A+ for This May End Badly. Highly recommended!" - Susan Azim Boyer, author of Jasmine Zumideh Needs a Win

“The bitingly hilarious, heartfelt This May End Badly takes your favorite fake dating trope and adds plenty of downright delightful shenanigans that’ll have readers tearing through the pages. If you’re looking for a ship to root for, then jump aboard, mateys.” - Emma Lord, New York Times bestselling author of You Have a Match

“Markum takes no prisoners in this stunning debut about fighting for what’s right, even if it means growing up… a little.” - Ashley Schumacher, author of Indie Next pick, Amelia Unabridged and Full Flight

"Funny, charming, real... Set in a prep school during senior year, this debut tackles it all: feminism, college applications, kissing your fake boyfriend, friendship changes, and ultimately figuring out what you want your legacy to be...without losing who you are at your core. This May End Badly feels like a fresh, feminist take on Looking for Alaska, and perfect for fans of Stephanie Perkins and Ally Carter. LOVE LOVE LOVE LOVED IT." - Rachel Simon, youth services librarian, Newton Free Library, Newton MA

"I haven't had that much fun reading a book in a long while. Whip smart and at times laugh out loud funny and emotional, the dialogue is beyond amazing. Doe's dedication to one of only place she feels safe was so powerful and the whole girl gang was outstanding! The way both schools unite to support each other at the end to protect future girls? Perfection. Change is hard and often painful and the way Doe experiences and comes to terms with it was touching and real." - Mike Lasagna, bookseller