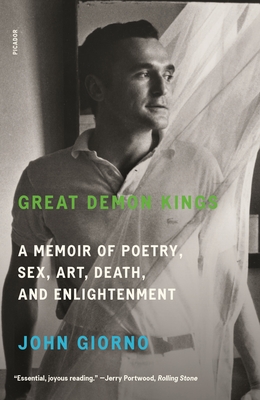 A rollicking, sexy memoir of a young poet making his way in 1960s New York City

When he graduated from Columbia in 1958, John Giorno was handsome, charismatic, ambitious, and eager to soak up as much of Manhattan's art and culture as possible. Poetry didn't pay the bills, so he worked on Wall Street, spending his nights at the happenings, underground movie premiers, art shows, and poetry readings that brought the city to life. An intense romantic relationship with Andy Warhol—not yet the global superstar he would soon become—exposed Giorno to even more of the downtown scene, but after starring in Warhol's first movie, Sleep, they drifted apart. Giorno soon found himself involved with Robert Rauschenberg and later Jasper Johns, both relationships fueling his creativity. He quickly became a renowned poet in his own right, working at the intersection of literature and technology, freely crossing genres and mediums alongside the likes of William Burroughs and Brion Gysin.

Twenty-five years in the making, and completed shortly before Giorno's death in 2019, Great Demon Kings is the memoir of a singular cultural pioneer: an openly gay man at a time when many artists remained closeted and shunned gay subject matter, and a devout Buddhist whose faith acted as a rudder during a life of tremendous animation, one full of fantastic highs and frightening lows. Studded with appearances by nearly every it-boy and girl of the downtown scene (including a moving portrait of a decades-long friendship with Burroughs), this book offers a joyous, life-affirming, and sensational look at New York City during its creative peak, narrated in the unforgettable voice of one of its most singular characters.

John Giorno (1936–2019) was a New York–based poet and performance artist and the founder of Giorno Poetry Systems. His own poetry collections include The American Book of the Dead, Balling Buddha, and Cancer in My Left Ball, and he established the Dial-A-Poem phone service. A longtime member of the Lower Manhattan art scene, Giorno was also an AIDS activist and Tibetan Buddhist whose work has been exhibited at the Museum of Modern Art, among other institutions.

"The sexiest and most graphic history of a love life I’ve ever read." —Laurie Anderson, The New York Times

"Essential, joyous reading . . . Giorno’s influence on poetry, art, and performance culture continues to be great. Now, thanks to his diligence in documenting so many personal details — and floridly annotating so many behind-the-scenes affairs — he has a chance to be reconsidered and credited with being one of the great gay sex-positive pioneers of the late 20th century." —Jerry Portwood, Rolling Stone

"Long before Patti Smith came to New York City to seek the artist’s life, there was Giorno. He’s lesser known these days (that’s what happens to poets who don’t put music to their words), but his hypnotic memoir, 25 years in the making and completed a week before he died, at 82, last year, should introduce him to a new and wider audience. Not just for his influence on poetry and New York’s downtown art scene from the 1950s into the 21st century, but also because his artistic life was nothing short of Zelig-esque from the get-go." —Michael Hainey, The New York Times Book Review

"The creativity and debauchery of gay artists and writers blooms in this exuberant memoir of avant-garde New York from the 1950s through the 1990s . . . An engrossing, passionate ode to a revolution in art and sensuality." —Publishers Weekly (starred review)

"The ultimate scenester of midcentury Manhattan, lover to a who's who of gay artists and writers, tells all in a posthumous memoir . . . Upbeat, funny, unsparing, and way over the top . . . probably a lot like the man himself." —Kirkus Reviews

"Great Demon Kings is an indispensably intimate account of the queer lives of Warhol, Rauschenberg, Johns and Burroughs. Even more significantly, Giorno’s memoir is haunted by the knowledge that great art requires a betrayal of the romantic vision of love, equality and the community of strangers." —Michael Millner, The Spectator

"Great Demon Kings is unlike anything you have ever read or imagined. John Giorno built a life that was shocking, joyous, and raw. His lifelong search for inspiration and love created one of the greatest voices of poetry and beauty, forgiveness and truth." —Michael Stipe

"If you want to know every scandalous detail about everyone who was anyone in the brilliant creative whirlwind that was 1960s and '70s downtown Manhattan (and believe me, you do) you must read this memoir.” —Edmund White

"Carrying on a wisdom tradition in American letters—striking, most recently, in the works of Allen Ginsberg and William Burroughs—John Giorno is a cosmic treasure. His Great Demon Kings is valiant, hysterical, unpretentious, sexy, gossipy, wise, and true." —Brad Gooch

"Giorno—openly gay at a time when many remained closeted—had relationships with titans of the art world, like Andy Warhol, Robert Rauschenberg, and Jasper Johns. But he was also a legend in his own right, and Giorno's sensual, visceral account of his own life reveals much about his own work." —Adam Rathe and Liz Cantrell, Town and Country

“John told jokes that he laughed at. His poetry had no rules but it respected the discipline that sound requires. I knew he practiced Nyingma meditation and loved lots of people, and he once told me he could fly across oceans and mountains without losing the mind he so cherished, the one without boundaries where wisdom and humor emerged as one. I wish he had been beside me on the airplane." —Fanny Howe