Why You Should Be a Socialist (Paperback) 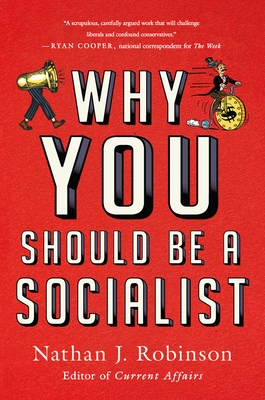 A primer on Democratic Socialism for those who are extremely skeptical of it—now in paperback!

America is witnessing the rise of a new generation of socialist activists. More young people support socialism now than at any time since the labor movement of the 1920s. The Democratic Socialists of America, a big-tent leftist organization, has well over 50,000 members nationwide. In the fall of 2018, one of the most influential congressmen in the Democratic Party lost a primary to Alexandria Ocasio-Cortez, a 28-year-old socialist who had never held office before. Now, AOC is one of the most influential politicians in the country.

But what does all this mean? Should we be worried about our nation, or should we join the march toward our bright socialist future? In Why You Should Be a Socialist, Nathan J. Robinson will give readers a primer on twenty-first-century socialism: what it is, what it isn’t, and why everyone should want to be a part of this exciting new chapter of American politics.

From the heyday of Occupy Wall Street through the 2020 presidential election and beyond, young progressives have been increasingly drawn to socialist ideas. However, the movement’s goals need to be defined more sharply before it can effect real change on a national scale. Robinson’s charming, accessible, and well-argued book will convince even the most skeptical readers of the merits of socialist thought.

Nathan J. Robinson is a leading voice of millennial left politics. He is the editor of Current Affairs. His work has appeared in The New York Times, The Washington Post, The New Republic, The Nation, Salon, The Guardian, and elsewhere. A graduate of Yale Law School, he is a PhD student in Sociology and Social Policy at Harvard University, where his work focuses on contemporary left social movements. He is the author of Why You Should Be A Socialist.

“Nathan Robinson’s articles, and Current Affairs generally, have been consistently challenging and thought-provoking, with incisive critique and informative discussion, lucid and provocative, and focused on well-chosen issues of major significance. I find myself regularly recommending Robinson’s articles to others, and re-reading them myself. Unusually valuable contributions.” —Noam Chomsky

"Nathan J. Robinson and Current Affairs are consistently excellent, writing at a very high standard, and offering serious and compelling alternative perspectives. Very worth following and reading." —Glenn Greenwald, co-founder of The Intercept

"Nathan Robinson is one of the clearest, most insightful writers working today. Why You Should Be a Socialist is a scrupulous, carefully-argued work that will challenge liberals and confound conservatives." —Ryan Cooper, National Correspondent for The Week

“Current Affairs editor Robinson profiles the progressive movement shaking up the Democratic Party’s old guard and makes the case for a new brand of socialism in this cogent debut.” —Publishers Weekly