Miss You Love You Hate You Bye (Paperback) 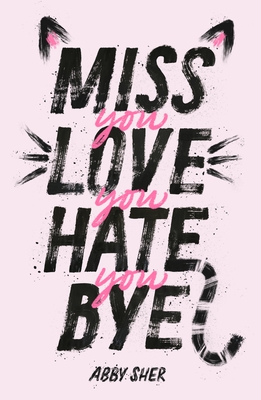 A darkly comic and heartbreakingly honest YA novel about finding the courage to help a friend who can't stop hurting herself.

Zoe and Hank (short for Hannah) have been inseparable since they met in elementary school. The leader of the pack, Zoe is effortlessly popular while Hank hides comfortably in her shadow. But when Zoe's parents unexpectedly divorce, Zoe's perfect facade starts cracking little by little. Sinking under the weight of her broken family, Zoe develops an eating disorder. Now she must rely on Hank for help.

Hank struggles to help Zoe; after all, she is used to agreeing, not leading. How can she help her best friend get better before it's too late?

Written partially in letters from Zoe and mostly in narrative from Hank's perspective, Abby Sher's Miss You Love You Hate You Bye is a poignant and eye-opening novel about friendship, mental health, and learning to put yourself first.

Abby Sher is a writer and performer whose work has appeared in The New York Times, The New Yorker, The Washington Post, The Los Angeles Times, Self, Jane, Elle, and more. She is also the author of All the Ways the World Can End (Farrar Straus Giroux Books for Young Readers), Breaking Free: True Stories of Girls Who Escaped Modern Slavery, Amen, Amen, Amen: Memoir of a Girl Who Couldn't Stop Praying, and Kissing Snowflakes. One of her essays has recently been optioned by Amazon for a television series. Abby has written and performed for The Second City, Upright Citizen's Brigade, HBO and NPR. She is currently a co-producer of the Chucklepatch Comedy Show and she lives in New Jersey with her family.

"Told from Hank's articulate, insightful, and pretty funny perspective, the chapters are punctuated by journal entries from Zoe (brief, chuckleworthy musings on recovery and double-crosses written from rehab) . . . Though Hank doesn't see herself as captivating as Zoe, she doesn't delve into pitiful self-deprecation (she knows she's smart, loyal, and a talented musician)—a narrative choice that makes her eventual confrontation of Zoe believable. Here's how to speak up even if it hurts." —Kirkus Reviews, starred review

"The unbalanced friendship will resonate with readers, many of whom might recognize the toxicity of the dynamic. Through Hank's story, Sher shows a way out of damaging friendships." —Booklist

"The novel—written in a snappy, accessible style that lightens the subject matter without trivializing it—focuses on Hank and the effect Zoe has on her." —Horn Book