The Catholic School: A Novel (Paperback) 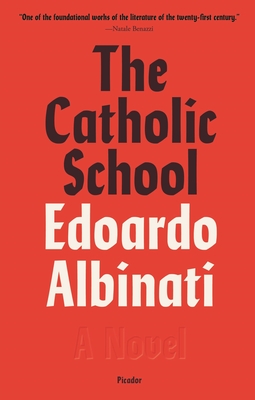 A semiautobiographical coming-of-age story, framed by the harrowing 1975 Circeo massacre

Edoardo Albinati’s The Catholic School, the winner of Italy’s most prestigious award, The Strega Prize, is a powerful investigation of the heart and soul of contemporary Italy.

Three well-off young men—former students at Rome’s prestigious all-boys Catholic high school San Leone Magno—brutally tortured, raped, and murdered two young women in 1975. The event, which came to be known as the Circeo massacre, shocked and captivated the country, exposing the violence and dark underbelly of the upper middle class at a moment when the traditional structures of family and religion were seen as under threat.

It is this environment, the halls of San Leone Magno in the late 1960s and the 1970s, that Edoardo Albinati takes as his subject. His experience at the school, reflections on his adolescence, and thoughts on the forces that produced contemporary Italy are painstakingly and thoughtfully rendered, producing a remarkable blend of memoir, coming-of-age novel, and true-crime story. Along with indelible portraits of his teachers and fellow classmates—the charming Arbus, the literature teacher Cosmos, and his only Fascist friend, Max—Albinati also gives us his nuanced reflections on the legacy of abuse, the Italian bourgeoisie, and the relationship between sex, violence, and masculinity.

Edoardo Albinati is a novelist and screenwriter who lives in Rome. His novel Svenimenti won the 2004 Viareggio Literary Award, and The Catholic School won the Strega Prize in 2016. For the last twenty-five years, he has worked as a teacher in Rebibbia, the largest prison in Rome.

Antony Shugaar is a writer and translator. Aside from Giorgio Faletti’s A Pimp’s Notes, his recent translations include books by Simonetta Agnello Hornby, Silvia Avallone, Nanni Balestrini (with an NEA translation fellowship), Fabio Bartolomei, Massimo Carlotto, Giancarlo De Cataldo, Diego De Silva, Marco Mancassola, Gianni Rodari, and Paolo Sorrentino. He is the author of  Coast to Coast and I Lie for a Living and the coauthor, with the late Gianni Guadalupi, of Discovering America and Latitude Zero. He has published with the Washington Post, the Boston Globe, and online with the New York Times, among other publications. He is currently at work on a book about translation for the University of Virginia Press.

“Reading some books feels aspirational, the attainment of an ideal, rather than an immediately realistic undertaking. It’s with this in mind that we recommend The Catholic School . . . Painstakingly researched and semi-autobiographical, the novel is based on a brutal real-life crime: the rape, torture, and murder of two young women by three men in 1975. The novel is part true crime, part coming of age, and explores sex, violence, and masculinity in contemporary Italy.” —The A.V. Club, “Books to Read in August”

“[Albinati’s] scrutiny of the infamous ‘Circeo massacre’ . . . yields an intense and intimate disquisition on masculinity, violence, and social class in 1970s Rome . . . The real focus of Albinati’s ‘obsessive inquest’ are the psychosexual impulses and socioeconomic forces behind the incidents, and the gnawing possibility that their root causes might be more than upper-class ennui and entitlement, something even uglier and essential to human nature . . . [The Catholic School] is a knot of interlocking philosophical concerns that the author has spent a lifetime trying to untangle.” —Brendan Driscoll, Booklist (starred review)

“A vast, philosophically charged novel of education, faith, and crime . . . A little goes a long way, and there’s a lot of it.” —Kirkus Reviews