The Best of Gene Wolfe: A Definitive Retrospective of His Finest Short Fiction (Paperback) 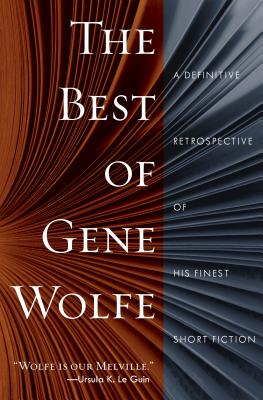 One of the greatest writers in genre (and literary fiction) of the 20th century, Gene Wolfe was a national treasure who produced the finest and most significant body of short fiction in the SF and fantasy field over the last fifty years. The Best of Gene Wolfe is an amazing retrospective collection of his short fiction, selected by Wolfe himself.

Too many award winners and Best Of stories to list here; just as a sample we have "The Island of Dr. Death and Other Stories", "The Fifth Head of Cerberus", "Petting Zoo", "The Tree Is My Hat", "Seven American Nights", and "A Cabin on the Coast."

Incredible tales from a writer who challenged and amazed. Who revolutionized the genre.

And whose stories will stand the test of time.

“If any writer from within genre fiction ever merited the designation Great Author, it is surely Wolfe . . . [who] reads like Dickens, Proust, Kipling, Chesterton, Borges, and Nabokov rolled into one.”—The Washington Post Book World

“One of the literary giants of science fiction.”—The Denver Post

“Gene Wolfe is as good a writer as there is today...I feel a little bit like a musical contemporary attempting to tell people what's good about Mozart.”—The Chicago Sun-Times

“Wolfe is a sophisticated stylist, and has more in common with writers such as Jorge Luis Borges than almost any science fiction writer both in terms of craft and themes.”—The Boston Globe

“Quite possibly the most important writer in the sf field.”—The Encyclopedia of Science Fiction

Praise for The Best of Gene Wolfe

“The Best of Gene Wolfe reflects his great versatility as a stylist, introducing me not to another side of Gene Wolfe, but to a great variety of other sides. ...Wolfe stands out as a major figure in contemporary science fiction and fantasy.” —Vector

“If every contemporary sf writer bar one were to be wiped out, it's a fair bet that Gene Wolfe would top many lists of who should be saved. ...An essential addition to any sf library.” —Interzone

“Wolfe is the best and smartest writer ever to write pulp science fiction and fantasy. ...You need this collection of 20th Century Wolfe, and we can only hope we'll see the 21st Century Wolfe collected before too long as well. And yes, this one is essential.” —Jonathan Strahan

“There are all kinds of stories in this collection, from adventure to meta-fiction to SF noir. ...here are so many really strong stories in the collection that anyone who loves reading, much less whether they usually enjoy speculative fiction or not, would be crazy not to check it out. Highly recommended.” —SFRevu